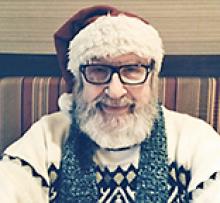 We are profoundly saddened and heartbroken to announce the passing of Robert Hayes on Monday, August 17, 2020, after a short illness.
Robert is survived by his wife Kim; his three daughters, Tammy, Lexi and Stephanie; grandchildren, Danielle, Shay, Quinlan, Aidan and Kaedmyn; great-grandchild Brooke; his brother John; nieces and nephews; other family members; many, many friends/fellow writers; and, of course, the dogs, Daisy, Henry and Nanuq; and the cat Aleena. He was predeceased by his parents.
He will be missed for his loving, gentle nature, his never-ending wit and humour, especially his puns, and his devotion to God.
Robert was born on October 9, 1941 in Paddington, London, England during the Second World War. They moved to Hayes, Middlesex when he was about 10 years old, and, as a young man, joined a five-year apprenticeship with a civil engineering firm. From there he moved onto Twickenham College of Technology studying surveying and levelling, which further led him to Canada.
Once he landed in Canada in 1966, Bob joined Underwood-McClellan engineers after completing his apprenticeship. He was a civil engineer doing structural bases for recreation centres. He did have trouble adjusting to the Canadian winters, and one particularly cold day he stayed home from work because, as he told his boss who later called him, "nobody goes out in this weather!" His boss told him to "get his a** to work!", so he went, and eventually became partially climatized, but never fully. He did get tired of the first long winter and, in an effort to get away from it, he drove out to Grand Beach! But he did say he got a great parking space!
He started teaching math, science, and drafting at Red River College, and still found time to write several applied math textbooks, and was instrumental in setting up Covenant Home for those with mental health issues. He retired from Red River in 1995, but did not stay retired for long. He joined Horizons for retraining, and became a successful telephone solicitor because they loved his British accent. His love of design led him to work at Revy, designing bathrooms and kitchens, working at Standard Aero, and Loewen Windows. He always loved writing, and was a most beautiful poet. He was the chairperson of the Canadian Authors Association Winnipeg Chapter, and helped many, many writers with their work.
As gifted as he was with words, he was equally talented with the non-sensical, and was well known for his catch phrases of: bogies greenie, big black Barcle, and his favourite - skim bams.
Bob was a very spiritual man. He studied theology, and was an elder in the Home Street Christian Church for a time, until finding a home in the Charleswood United Church, where he was happy to participate wherever he could. Bob was a deep-thinking and feeling man, whose faith was a massive influence in his life.
He was very intuitive, and was helpful to many by reading palms and providing perspective. He loved Christmas, and played Santa Claus for the past two years. With his own white beard, he was the most authentic Santa, and even the adults loved him. One time on the way home from playing Santa, he was stopped by a train and got out of the car and walked along the line of stopped cars, handing out candy and wishing everyone a Merry Christmas, and made everyone smile.
He was a beautiful soul, and has influenced so many lives. He will be missed by many forever.

Thank you to the St. Boniface Hospital employees on 5A Cardiology, who took excellent care of Robert after his heart attack on Father's Day, and went far above and beyond, and through their perseverance, found the pancreatic cancer that took him from us. Thank you to the Palliative Care Program and home care staff who were wonderful in their care, and for getting him home to spend his last days in the care of his family and friends who loved him so very much.
There will be a celebration of Robert's life on Saturday, August 29, 2020, starting promptly at 2:00 p.m., at the Charleswood United Church at 4820 Roblin Blvd. Social distancing measures will be observed with masks and hand sanitizer.
If people wish to honour Robert's memory, donations can be made to CancerCare Manitoba Foundation, 675 McDermot Avenue, Room ON1160, Winnipeg, MB R3E 0V9, or to a charity of their choice.