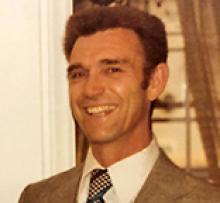 Fred Loveday sailed into the great beyond on August 14, 2020 after what he called: "88 good years."
In 1945, Fred marched into a barbershop to have his long hair sheared into a fashionable brush-cut. Upon arriving home his mother promptly kicked him out of the house. Several hours later sister, Loretta, tracked him down telling him it was okay to come home. He kept the same haircut for the next 75 years. After that Fred took fashion cues from no one. He wore pocketed shirts, short sleeves in the summer, long sleeves in the winter, topped spring and fall with a wool mackinaw.
Fred grew up on Lawndale Avenue in Norwood, attending Norwood Collegiate where close friends said he ran circles around them as a student and loved mischief. On New Year's Day at West Hawk Lake, Fred and friends chopped a hole in the ice. With a broomstick over the hole, Fred dipped in up to his chin. Running back to the cottage barefoot in the snow gave him Chilblains that felt like needles sticking into his feet for months. His mother figured out the problem and soon he was doing a few extra chores around the house.
Fred attained a Bachelor of Science degree from The University of Manitoba where he befriended a fellow he dubbed "Spaghetti Legs" for not being able to hold his liquor well. Spaghetti Legs was able to redeem himself by introducing Fred to a beautiful nurse named Betty. Fred knew he'd found a keeper, asked for her hand, and was smitten for 65 years.
After graduation, Fred went to work at Loveday Mushroom Farms following the family tradition his grandfather established in 1932. Three years later Fred's father died suddenly from a heart attack. At age 27, Fred had to step in. He ran the business of growing mushrooms through floods, recessions, and competition from publicly traded companies for the next 38 years.
A summer job as a counselor at Camp Stephens launched Fred's love of Lake of the Woods. After many summers spent exploring the lake on a cabin cruiser named, Betty Anne, he bought property on the lake. Once a cottage was built, he sought a new challenge and entered the Lake of the Woods International Sailing Association Regatta. He participated in the LOWISA for many years, winning Division 1, placing third in Divisions 3 and 4 as well as being honoured as the oldest skipper in the grueling week-long race.
Service to others was always important to Fred. He started at a young age as a sea cadet, dutifully playing the trombone even though his arm was too short to hit the last note. Fred was proud to be a board member at Tache Hospital as well as a longtime member and president of the SERTOMA Club.
Fred is looking down on us singing his quirky songs with daughter, Diana Vadeboncoeur, his mum, Audrey Loveday, and his dad, Bertie Loveday. Still left to figure out what the songs mean are wife, Betty Loveday (nee Verheul), sister Loretta Mott, son Burton Loveday, daughter Joanne Butcher, seven grandchildren plus one and a half great-grandchildren.
In lieu of flowers, please donate to: the Alzheimer Society of Manitoba or St. Boniface Hospital.

Family and friends may sign a
Book of condolence at www.glenlawn.ca.