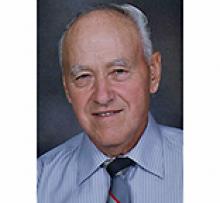 It is with great love and sadness that we announce the sudden passing of beloved husband, father and Gigi, Clarence, on August 25, 2020 at Selkirk General Hospital, at the age of 80 years.
He will forever be remembered by his wife Verna of 56 years, his children, Audrey (Kevin) Mulla, and Daniel (Lori) Kozie, grandchildren, Eric Mulla, and William and Alex Kozie; sisters, Jean Ryback, and Marge (Charles) Belsham, and by a large extended family and friends.
Clarence was predeceased by his infant brother Mernie, parents, Steve and Antonia Kozie, and brother-in-law Mike Ryback.
Clarence was born in Selkirk and raised in Hazelglen on the family farm. In 1964, he married Verna Boyko at the Immaculate Conception Church in Cooks Creek. Clarence worked for the Western Peat Company for 11 years. After a short time at Polaris Industries, he worked for the Canadian National Railway until his retirement in 1999. Alongside his day job, he ran the farm with the support of his family until his retirement in 2012. Clarence loved the farm life and wasn't afraid of a hard day's work. He took great pride in everything he did including maintaining his pristine farm yard and equipment.
In Clarence's earlier years, he played fast ball with the Lazy Nine and Beausejour Beavers, and hockey in Hazelridge. After retirement, he took up curling in the Beausejour Tuesday morning league. He also enjoyed hunting and ice fishing with family and friends. His greatest passion was snowmobiling, racking up 10s of thousands of miles on numerous ski-doos from the late 1960s to just last season.
Clarence had a distinct personality that provided those around him with detailed stories, humour and his opinion (whether you wanted it or not). He was generous with his time and showed his love by the things he did for you.
Clarence was a very proud family man, enjoying many outdoor activities with them. He was extremely proud of his grandchildren in all of their accomplishments and loved to spend time with them.
Clarence was a lifelong member of the Immaculate Conception Church and an active member of the choir for many decades.
The family would like to thank the emergency staff of the Selkirk General Hospital for their care, efforts and compassion.
A private service will be held on Saturday, August 29, 2020 at Immaculate Conception Church, Cooks Creek, MB. In lieu of flowers, donations may be made to the Immaculate Conception Church Grotto Restoration Fund (www.immaculate.ca).

Friends and Family may leave condolences and share memories by visiting Clarence's memorial page at www.seasonsfunerals.ca


With sadness the family announces the unexpected passing of Clarence, at the age of 80 years, on August 25, 2020.
Clarence will be sadly missed by his beloved wife Verna, daughter Audrey, son Daniel and their families.
A complete obituary will follow in Friday's paper.

Friends and family may share memories and leave condolences by visiting Clarence's memorial page at seasonsfunerals.ca