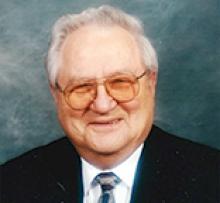 With great love and sadness we share the passing of Metro John Bodykevich. He was predeceased by his precious sons, Constantine and David. His parents, parents-in-law and his siblings, William, Alexander, Thomas and Olga have all passed on before Metro.
He leaves to mourn his passing his beloved wife Frances, many extended family members and dear friends.
Metro was born October 21, 1928 to Joanne and Nicholas Bodykevich. He was a mischievous child with an amazing personality. Being the baby of the family afforded him a chance to get away with many things his siblings could not.
His education and career led him to teaching in rural Manitoba. He met his beloved Frances and spent the next 64 years of his life with her by his side.
Metro worked as a bookkeeper in the office of Standard Aero for several years. He and Frances became part hotel owners in Eriksdale, MB and later in Winnipeg, MB. Metro spent some time at MPI, Plessis Road location. He was a great addition to their team and enjoyed being part of that work. Always a jokester, they enjoyed his presence.
After his retirement, he became very involved at Holy Eucharist Church, busy peeling and mashing potatoes for the ladies for perogy making, participating in the men's club, several "brotherhoods" or helping with the church Bingo. Metro was a member of the Knights of Columbus for the past 50+ years. His devotion to the church was a huge part of Metro's spiritual life.
Metro was a good man. He was loving and kind, with a terrific sense of humour. No one could tell a joke as wonderfully as Metro – even if you'd heard the story a hundred times, he always made it seem fresh and new. He traded jokes like they were surprises, and it delighted him to get a laugh.
He was a hard-worker, giving his time to friends and family alike. Metro was very protective of his loved ones and always did his best to make folks feel welcome and loved. His sharp wit was honed and maintained through a love of word puzzles and he sought out ways to test his mind. He maintained a close circle of friends with weekly coffee dates and poker nights.
His laughter will forever echo in the hearts of those who love him.
A private family service will be held at a later date.
Donations may be made to Heart & Stroke Foundation of Manitoba.