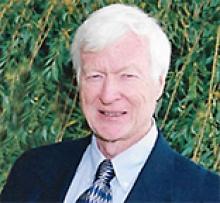 Ron passed away peacefully, at home, on Friday, August 21, 2020, surrounded by his loving family.
Ron enjoyed a long and exciting career working in broadcasting and sound for over 40 years from CKRC to CBC Winnipeg. He worked on many musicals, dramas, documentaries, three Olympics and a special project for UNESCO. He also taught TV sound in Kingston, Jamaica. After retirement, Ron did sound at the arena, the stadium and the Manitoba Legislature.
While living for 10 years in Kelowna with Ellie, Ron volunteered at the B.C. Cancer Centre for nine years. Ron and Ellie also volunteered as "Aides de Camp" for John Harvard at the Manitoba Legislature, as well as volunteering at Agape Table.
Ron and Ellie travelled extensively and on one trip they were married on the Eiffel Tower in Paris.
Ron brought over 65 years of Amature Radio expertise and experience to the Ham Radio Club. Recently, his name was added to the honour roll for his valuable contributions to the Ham Radio. Ron's brother Dave will take over his call sign VE4PL in Ron's memory.
Ron enjoyed working on projects at the Seniors Club with his good friend Ken Kennedy.
Ron is survived by the love of his life, Ellie Taylor, his children, Steve (Liza), Kristen (George), Scott (Lisa) and Susan, his five grandchildren, Amanda, Bailey, Darren, Owen, Liam, and his great-granddaughter Emily. He also leaves Ellie's children, Tracy (Norm Cote) and their families, and Dani (Shelley Martin).
Ron will be missed by his many wonderful friends and CBC colleagues, by whom he was respected and admired for his knowledge, his work ethic and his gentle spirit and kindness. A heartfelt thank you to everyone for all the visits, phone calls and emails that lifted his spirits in the final weeks
Ron's family wish to thank the very caring staff at CancerCare Manitoba. A very special thank you to Dr. Ian Kasloff, Ron and Ellie's physician, for his excellent care and compassion shown to Ron.
Observing Ron's wishes, there will be no formal service. A private family celebration of Ron's life will be held at a later date.
In memory of Ron, donations can be made to CancerCare Manitoba. Make a donation to