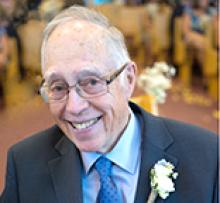 It is with deep sadness that we announce the passing of our dear husband, father, grandfather, great-grandfather, uncle and friend, William "Bill" George Thorne, on August 19, 2020.
Bill leaves us to join his departed loved ones; his mother and father Margaret (nee Cole) and Harry Thorne; sister Ruth Thomas; and brothers, James Thorne and Howard Orser; grandson David; and son-in-law Ron. Remaining to forever cherish Bill's memory are his wife of 66 years, Dorothy; children, Tim (Gro), Nancy (Ron), David (Sue) and Laura (Warren); grandchildren, Jesse (Clara), Christopher Angus (Stephanie), Christopher Stephen (Janessa), Sarah (Mark), Camilla (Nico), Michael, Matthew (Julia), Amy and Leah; and five precious great-grandchildren, Harper, Tatum, Erik, Sawyer and Madelyn.
Bill was born in Deloraine, Manitoba on March 19, 1931, but lived most of his life in Winnipeg. There are two places that left great impressions on Bill's life: Miami, Manitoba where he and his siblings were raised by their widowed mother, and Matlock, where he built the family cottage with his own loving hands, creating years and years of wonderful memories and where there are many, many more still to come. Dorothy lovingly recalls how when she and Bill would sit down together on the deck of the cottage in Matlock, he'd say to her, "It may not be heaven, but it's the next best thing." He remembered his time in Miami fondly and told many wonderful stories of his experiences there – skating in the winter, swimming in the summer, watching movies on Saturday night in the Oddfellows Hall, bicycling in the town and surrounding area – all the stuff of a happy and active child. Living in Miami during the war years, he also did the work of a man: driving teams of horses, working in the town store stocking shelves and delivering groceries, and whatever other jobs he could find. He always gave his mother his earnings on payday.
Challenging does not begin to describe what it was like for Bill's mom to raise three young children, all under five years of age without a husband and father, yet despite it all, she triumphed. We all believe that it was her fierce commitment, love and determination that was instilled by her in Bill and his siblings that allowed them all to be successful in their chosen professions, but more importantly, in how they married and raised their families, passing those attributes on to the next three generations. He was a role model to us all, showing us through both his words and actions, what being a devoted and loving spouse, parent and grandparent is supposed to look like. It was Bill's undying love for Dorothy, and hers for him, that was the true inspiration to all that knew them.
Bill loved his family with a passion. We all meant the world to him and he told us so often. He also appreciated everyone who entered his life, regardless of how. He was a genuine true friend who was always willing to lend a hand, a patient mentor to so many and a friendly ear who could always be counted on for some sage advice, or to just listen, and always with the utmost respect and humility. For all those who knew Bill, they considered themselves fortunate to have him as a friend and colleague.
Bill met Dorothy in 1950, after being "set up" by their mutual friend Marnie at a wiener roast and the rest, as they say, is history. They spent a short time in the Fort Rouge area, ending up raising their children in the family home on Marshall Crescent in Fort Garry. Bill spent 37 years in the employ of Great-West Life, retiring in 1990 as a Vice President in Underwriting. He didn't slow down one little bit in retirement; in fact, he kicked it into a higher gear spending his time doing things with his hands and tapping into a truly creative and innovative inner self. His hobbies and talents were quite diverse from restoring old John Deere tractors with his close childhood friend and cousin Bill Lenton, to mastering the art of welding, and to writing his book, "Remembrances," a collection of photographs and stories that chronicle his life journey, a gift from him to all of us that we will hold onto and cherish forever. Another noteworthy accomplishment was inventing a metal bender that Princess Auto ended up manufacturing and selling in their chain of stores. Bill's biggest talent though, driven by his huge heart along with his capable hands, was his ability to build something, anything. There aren't many houses or cottages of friends and family that don't have a nail in it that was driven in by Bill.
There are too many people who Dad cared deeply for, so trying to list everyone would end up in some people being left out. Always one who put others before himself, we know that Bill wouldn't want that to happen. You all know who you are so please, as you read this and for the years ahead, remember him often with a smile or a tear, or both. See him in the smiles of his grandchildren and great-grandchildren, hear him when someone laughs (or sneezes) loudly, feel his presence when you come to the cottage that he built, but most importantly, please make sure to always hold him near in your hearts and thoughts for as long as you possible can.
A private family service was held last week.
Flowers are gratefully declined. Those who wish may contribute to either CancerCare Manitoba or the Juvenile Diabetes Research Foundation.

We will miss him terribly,
in fact, we already do.