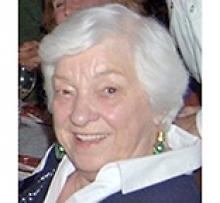 
On August 19, 2020, Nora Anne Abbott (née McLeod), aged 93 years, of Winnipeg, MB, passed peacefully in her sleep at West Park Manor.
She is predeceased by William (Bill) Abbott, her beloved husband of 67 years, and her sisters, Mary Saunders and Margaret McLeod. She is survived by her brother Captain William (Bill) McLeod, her children, Brad Abbott (Susan Pridham), Sharon Vanderschuit (Wybo), and Fred Abbott (Barbara) and six grandchildren.
Nora was born and raised in Kenora, ON, on beautiful Lake of the Woods.
Her father, Colonel William (Bill) McLeod returned from the Great War and took on the family shoe store, McLeod Shoes, on Main Street in 1920. The family lived in Lakeside and later in the apartment above the store. The McLeod family enjoyed their summers on Coney Island at their red log cabin surrounded by a vast lawn with towering birches and beautiful gardens. The family would move there as early as possible in the spring, with Nora canoeing to town with her sister Mary to finish the school year. Being very social and fun-loving, Nora attracted a wide circle of friends, including many summer residents from Winnipeg and beyond, who referred to her fondly as "Nora from Kenora".
One of those friendships blossomed into so much more. As a teenager she worked as a waitress at CPR's Devil's Gap Lodge and became smitten with a charming fishing guide named Bill Abbott who had a family cottage nearby. Their relationship took off, so much so that Nora asked her parents to allow her to attend Riverbend School for Girls in Winnipeg for Grade 12 to "follow" Bill. It was not an insignificant expense, but her parents relented and supported the move. After high school, Nora worked at a law firm while Bill pursued his medical degree. In 1952 they married at St. Alban's Cathedral in Kenora.
Bill's path to a successful OB/GYN career could not have occurred without Nora's unwavering support, especially after children arrived. She persevered as sole caregiver while Bill studied in Ottawa and Toronto and she also moved her young family to Bakersfield, CA for two years during Bill's residency. Back in Winnipeg, she was always there for her family while Bill was on call every second night and every second weekend.
We will always be grateful for how she led our family through the ups and downs of life. Whether it be the family ski cabin being demolished by a tornado or the summer cottage being destroyed by a fire, she maintained strength and focus.
Nora was devoted to her friends. She nurtured her friendships through the activities she loved, whether it be skiing, skipping her Winnipeg Winter Club curling team, playing tennis, golfing trips in retirement to BC and, of course, dinner parties. One of her most notable annual events was heading out on Halloween to raise money for charity with her closest friends. Examples of themes through the years included Quinton's Cleaners drivers and Ambulance drivers/patient. Unfortunately, they could not get the 1970's Winnipeg Blue Bombers Booster Buggy licensed for the streets of Winnipeg!
Her games and hobbies also provided her with joy day-to-day, whether it be "bridging" with her Winnipeg and lake foursomes, card games with family and friends, and knitting and needlework.
Nora also devoted her time and energy to help others, including the Junior League, the United Way, and St. Andrew's United Church.
Nora's legacy is our commitment to our family, our love for our friends, and our passion for Lake of the Woods. She lives on within us all.
The family would like to thank the staff of West Park Manor, for their kind and caring support of Nora in her final years.
A private family ceremony celebrating Nora's life will be held at her birthplace on Lake of the Woods next summer.
In lieu of flowers, gifts may be made to the W.E. Abbott Memorial Fund at The Winnipeg Foundation, 1350 One Lombard Place, Winnipeg, MB R3B 0X3. Tel. 204-944-9474. www.wpgfdn.org.