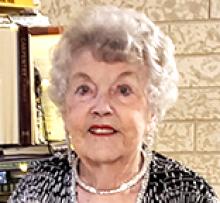 On Monday, August 24, 2020, Thorey Gudrun Blow (nee Goodman) passed away at the age of 89.
She was predeceased by her parents and seven siblings, and is survived by her two daughters, Allison Tracy Jones (Lance) and Terry Allana Blow; her brother Vilhjalmur (Bill) Goodman (Dorothy); and numerous nieces and nephews.
Thorey was born on April 13, 1931 at home in Wynyard, Saskatchewan, spending most of her early life on the farm.
Upon finishing high school in Wynyard, Thorey moved to Winnipeg where she lived with her sister while attending Success Business College. Her first job was with the Canadian Bank of Commerce where she held a few different positions, including a Foreign Exchange Clerk and Stenographer, Secretary to the Bank Lawyer and as a Payroll Clerk. While working for the bank, she joined the Bank Baseball League, which eventually became the City of Winnipeg Class B League.
While working at Benjamin Bros Ltd., she met Edward (Ted) Blow at the Winnipeg Roller Rink and the two were married on September 20, 1958 and had their two daughters. They continued rolling skating together for many years as well as joining a mixed curling league. They were also active members of the Crestview United Church where she was a member of the choir for many years.
One of Thorey's loves was signing with the Sweet Adelines female signing group, which she joined in 1982 and remained an active member until Christmas 2019. She looked forward to the yearly singing competition where the group would travel and compete against other choruses from Canada and the United States.
Thorey spent the last number of years living at the Metropolitan Kiwanis Courts where she was able to be close to family and friends.
We would like to thank the staff at the Metropolitan Kiwanis Courts for making Mom's final years enjoyable, the CAU at the Grace Hospital and the Transitional Care Unit at the Misericordia Hospital for taking such good care of Mom at the end.
Cremation has already taken place and at the request of the family, a small private burial will be held at the Chapel Lawn Memorial Gardens.
In lieu of flowers, donations can be made in Thorey's memory to CancerCare Manitoba, or to any charity of your choice.