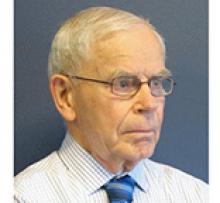 It is with great sadness that we announce the passing of William Malcolm McDermid at the age of 81.
William is survived by nephews, Michael, Cameron and Steve, niece Melissa and sister-in-law Linda. William was predeceased by his father George and mother Edith.
Bill received his Bachelor of Science degree BScEE in electrical engineering from the University of Manitoba in 1961. Following a year with Ontario Hydro, Bill joined Manitoba Hydro in 1962 and continued to work for Manitoba Hydro for 56 years. Bill was certified to the grade of member with Institute of Electrical and Electronics Engineers IEEE in 1965. He became a member to the Association of the Province of Manitoba as a registered professional engineer in 1967; chaired the PES Winnipeg Chapter in 1978/1979; received the APEM (now APEGM) Merit Award in 1992; received the IEEE Third Millennium Medal and was elected IEEE Fellow in 2005; president of the IEEE Dielectrics and Electrical Insulation Society in 2007 to 2008; and recipient of P. Ziogas Electric Power Award in 2009, for outstanding contributions to the development of rotating machine insulation testing. Bill was director of the high Voltage Test Facility in Winnipeg.
In lieu of flowers, donations may be made to CancerCare Manitoba.
In keeping with William's wishes, cremation has taken place, and laid to rest in Elmwood Cemetery.