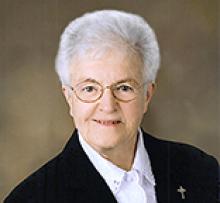 In St. Hyacinthe, August 17, 2020, Sister Odile Saint-Pierre (Saint-André) of the Sisters of St. Joseph of St. Hyacinthe passed away at the age of 96 years. She had 69 years of religious life.
She was born in St. Georges, Manitoba. She was the first of three children of Arthur Saint-Pierre and Germaine Cosson. She taught for 22 years in schools in Manitoba and Saskatchewan. During 14 years, she was a travelling librarian for schools in the Interlake region. From 1975 to 2000, she added faith education to her activities. She is an exceptional woman whose heart is all inclusive.
In 2008, she left her native land to return to the mother community in St. Hyacinthe, QC.
The funeral was celebrated on Tuesday, August 25, 2020 in the chapel of "Les Jardins d'Aurélie", the residence where the sisters live.
Sister Odile is survived, in addition to her religious family, by her sister-in-law Auréa Bremner (late André) and their daughters, her sister-in-law Cécile Touzin (late Louis), as well as numerous relatives and friends.