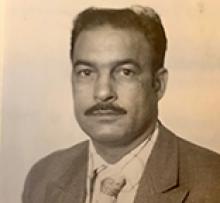 It is with sadness that we announce the sudden passing of Santokh Dhillon on August 28, 2020 with his family by his side. Santokh was 81 years old at the time of his passing.
Santokh is survived by his sons, Jaswinder Singh Dhillon (Harpreet) and Sarbarinder Singh Dhillon (Kashmir); daughter Kiranjit Kaur Claire (Paul); grandchildren, Monika Kaur Dhaliwal (Harveer), Shawn Singh Dhillon, Shamae Kaur Dhillon and Sanjay Singh Dhillon. Santokh was one of seven siblings. He was predeceased by his brothers, Pritpal Singh, Karnail Singh and Gurnam Singh. He is survived by his brother Surjit Singh Dhillon (Parmjit) and sisters, Parmjit Kaur Brar and Sharanjit Kaur Dhaliwal (Charanjit).
Santokh was born in Bhattian, Punjab, India on February 6, 1939. He attended primary school in Bhattian and then secondary school in Ludiahana. Upon completing secondary, Santokh began a career with the Police and then enlisted with the Corps of Military Police of the Indian Army. During his time with the Military Police, he was stationed in Jammu and Kashmir. Also during this time, he and his late wife, Amarjeet were married (April 13, 1957). Their first son, Jaswinder, was born in 1959, their second son, Sarbarinder, arrived in 1961 and finally their daughter, Kiranjit, was born in 1967.
In 1971, Santokh was scheduled to immigrate to Canada, but due to a car accident these plans were temporarily put on hold. Towards the end of 1972, he was finally able to travel to Canada. He came to Winnipeg because this was where many of his friends and family had immigrated to, prior to him.
Once in Winnipeg, Santokh quickly found employment at various jobs, including a stint as a security guard at the Royal Canadian Mint. He eventually became a welder with Co-op Implements where he met many life-long friends. He worked at the Co-op plant until it closed. In 1987, he decided to become his own boss and began working as a taxi owner/operator. He worked his entire career in the taxi business affiliated with Unicity Taxi.
During his years at Unicity Taxi, he was actively involved with the company and developed many friendships with his customers and fellow drivers. "Dhillon" as he was known to his friends, enjoyed his years in the taxi business and always spoke fondly of the friendships he made. He was always very proud of his job and the fact that he was able to work for himself. He officially retired in 2010.
Santokh was a community minded man and like many others in the Punjabi Indian community, he took great pride in helping friends and family members immigrate to Canada. Once here, he continued to support them in any way he could.
In his retirement years, Santokh enjoyed spending time with his family and his friends. He always had great stories to tell, especially about India, his time there, its history and the history of the Sikh religion. He was, however, most fond of the time he spent around his children and grandchildren, whom he adored in his own quiet way.
Daddy was a strong family man and he will be missed and lovingly remembered by his family. He will also be fondly remembered by all who knew him.
Due to COVID restrictions, a small private service will be held.