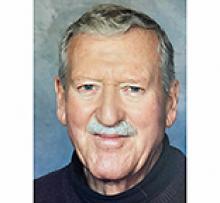 John Sigvald Paulsen passed away peacefully with a smile on his face. He had been thinking about how lucky he was. He had been blessed with an extraordinary life. Two exceptional wives had provided unbelievable support and tender loving care. Phyllis (nee Bajus) his wife of 57 years, bore and raised their four children, Richard (Terri) sons, Dusten and Brandon (Megan), great-grandchildren, Lucas and Sara; Kelly, daughters, Katie (Rhys) and Laura; Danica (Darren), daughter Valerie (Scott) and son Andrew; David (Michelle), daughters, Sydney (Dave) and Brooke (Noah). John is also survived by brothers, Barry (Anne), Terry (Meg) and brother-in-law Don Bajus (Bev) and numerous nieces and nephews.
Following Phyllis's untimely death from cancer, John renewed an old friendship; his friendship turned to love. Diana Crossin joined John in marriage and rewarded John by providing a ready-made family - three sons, Jeffrey, Kelly and Michael Parker along with five grandchildren. Kelly has daughters, Alexa Mackintosh (Gord) and Madison (Cole). Michael (Susan), their children, Jack, Sam and Stefanie. With two families doting over him, John's later years were truly remarkable.
John's extraordinary life as a family man, engineer, adventurer, horseman and outdoorsman, began in Elphinstone, MB, the son of Paul and Anne (Geekie) Paulsen. The family moved to Whitemouth, MB where John attended high school before entering the University of Manitoba to graduate in Civil Engineering. He thrived on work and made close friends while at Imperial Oil, Great-West Life and Wardrop Engineering. John, Phyllis and family travelled extensively, six moves within North America, but it was his international work that he loved the most. While Vice-President of Wardrop's International Division, the family relocated to Africa in the 1970s. He oversaw construction of 1000s of boreholes in rural Ghana, conducting the largest hand pump test program in the world at the time. The project contributed significantly to the development of a pump suitable for the developing world. Nigeria benefitted next with potable water to the rural areas.
When the family eventually settled in the Oakbank area, John became active in polo, standard bred racing and combined driving. He was a founding member of the Springfield Polo Club. He played an instrumental role in creating the Manitoba Combined Driving Association. John's love of the outdoors led him to become active in Friends of Birds Hill Park - a term as President. Together with Phyllis, donated a bench on Cedar Bog Trail. Family and friends have fond memories of the family hobby farm "The Lazy P." Good times down by the pond, the sleigh rides and around the piano. John's love of music was shared with his entire family. The fall season with the changing colours signalled goose and deer hunting, which John enjoyed until failing health would have curtailed this year's shoot. Hawthorne Village on Vancouver Island became John and Diana's winter home. They cherished their time there, enjoying Island life. Wandering beaches, exploring fascinating trails and meandering through charming villages, not to mention the flowers in full bloom, humming birds at the feeder and golf in January. Summer months were precious. Time was spent with Diana's family at their "yellow" cottage on the Lake of the Woods. The yearly tradition to swim to Mackies Island, the snorkeling, fishing, bonfires, the beauty of the sunsets, the rising full moon's reflection glistening across the lake. Such peace.
Thank you to all who enriched John's life and to those involved in his care during this recent time.
A private Celebration of Life will be held September 26, 2020 at Oakbank United Church.
In lieu of flowers, donations in John's memory may be made to CancerCare Manitoba Foundation or to the Winnipeg Ostomy Association, 204-825 Sherbrook Street, Winnipeg, R3A 1M5 in support of the Ostomy Youth Summer Camp.

Friends and family may share memories
by visiting John's memorial page at seasonsfunerals.ca