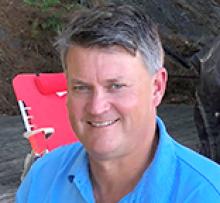 Peacefully on August 26, 2020, the day of his 26th wedding anniversary, Jon left us and is finally out of pain.
Jon leaves us to join his departed loved ones: his father James Stewart, his in-laws, Lorene and Patrick Angott, and his grandparents, Edna and Staten Stewart and June and George Little.
He leaves to mourn and honour his memory, his wife and best friend Jodee (Angott) Stewart, his beloved sons, Keenan and Connor; his mother Linda Stewart, brothers, Scott Stewart (wife Daryla Christie, Adam, Nathan and James) and Matthew Stewart (wife Cjay, Zachary, Ryan and Lucas), as well as many other relatives and friends.
Jon had a love for life, sports, the lake, travelling, business, but most importantly his family and friends.
He spent every summer at his family camp and most recently at his own dream cottage on Lake of the Woods. He loved boat rides, watching the kids play beach volleyball and was always up for a dock party.
Jon had many unique experiences in his short life, including participating in Canada World Youth at 19, living in both Sidney, BC and Equador.
He travelled overseas several times with the Team Canada Bandy team, representing Canada at the world tournament.
Jon loved hockey, and played until his illness sidelined him. He coached his boys in soccer, flag football and hockey. He loved coaching kids, it was a true passion. As adults, the boys were able to play hockey alongside their dad, Jon loved nothing more! He had the opportunity to play Bandy with Keenan, a true highlight.
Jon was a third generation Culligan man. He was proud to follow in the footsteps of his father and grandfather. His father was his role model and he possessed many of the same qualities as Jim, hardworking, full of life with a big smile and laugh. Jon grew the business and was proud of the Culligan family in Winnipeg and Regina. He loved to collaborate, learn and grow. He had many lifelong friends in his business group (20 group). They were his mentors and advisors and they shared many wonderful experiences over 25+ years. He loved working alongside his brother Matt and valued and respected his employees.
Poodle, as many friends called him, was a people person. He made everyone feel included and brought such a special, positive energy and his contagious laugh, to any setting. He was a Fort Garry boy, often seen at Confusion Corner with his buddies after hockey or enjoying a meal with family and friends at Nicolinos.
He was a tease and known to pull pranks, no nephew was safe from the electric hug.
Jon wanted to thank his family and friends for their endless support, especially his mom who was by his side throughout this last year. There are too many people to list, but please know that no message or kind gesture went unnoticed. He fought a long hard battle, rarely complaining and still smiling, a true warrior.
Jon loved his sons more than anything and was so proud of them. He will live on in them.
At the end of the day, he was just a great human being and we loved him.
Jonathon was far too young, but he taught us many lessons and made us better people. He told us to always look on the bright side of life, make it a great day, be a good listener and friend.
We are heartbroken and we miss him immensely.
A private service was held Thursday, September 3, 2020, with a Celebration of Life at a later date to be determined.