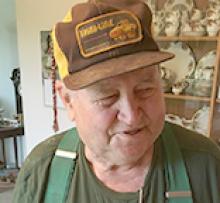 Richard Persoage passed away in Stonewall Hospital, after a brief illness, on August 27, 2020, at the age of 77.
He is survived by his sister Sophie Crow, niece Jocelyn Crow, nephew Mark Penner (Natasha), great-niece Briana great-nephews, Corbyn and Aimon Penner, and extended family and friends. He was predeceased by his father Nick (1966); mother Nettie (2007); sister Margaret Penner, and nephew Karl Penner (1980).
Richard was born and raised on the family farm in Teulon, MB. After finishing Grade 11 in 1964 he moved to Winnipeg, where he worked at Galpern's Candy Company and Union Carbide in the printing department. In 1966 he decided to pursue his passion for art so he took the train to New York City (NYC) and enrolled in a two-year course in graphic arts at the NYC School of Visual Arts. While in the Big Apple, Richard lived in an apartment (rented from George Bacon, a relative of Sir Francis Bacon) on Central Park. He also worked at Chock Full o' Nuts and United Parcel Service while attending school.
After graduating in 1968 Richard moved to Toronto, fulfilling his lifelong dream to live there. He worked at Cushing & Neville doing technical drawings and illustrations of airplane parts, and then worked for Ian Martin for one and a half years in Ottawa doing drafting for Mirabel Airport. After being laid off he established his own company: Richard Persoage Graphics on Hanna Avenue in Toronto, where he did freelance work. One of his more memorable commissions was building a chair that had no nails, although he said he'd never make another because it was too time consuming and there wasn't enough money to be made!
He also dabbled in a variety of other jobs such as movie extra, mushroom farmer, vitamin sales, and silver investor. In 1996 Richard moved back to Teulon to help care for his mother and worked for New Flyer Industries in Winnipeg from 1997 to 2010 until his retirement.
A self-described "lone wolf," Richard was creative, eccentric, independent, stubborn, and unique. As a collector of all things, he enjoyed going to auctions, thrift stores, and yard sales searching for "treasures" and always had a project (or six) on the go. Richard loved driving, movies, music, talking shop, tinkering, and working on cars and trucks (Chevrolet all the way!). His pride and joy was a 1963 white Chevrolet Corvette he was restoring. He was also a dab hand at making jam and baking muffins and cookies - although sometimes with an overly generous amount of cinnamon!
Cremation has taken place. In accordance with his wishes no service will be held; a private family gathering will take place at a later time.
In lieu of flowers, please consider a memorial donation to a charity of your choice.
The family would like to thank the staff at Stonewall Hospital for taking care of Richard during his last days. A special thank you to cousins, Joan, Marion and Michael Woloshyn for being such a huge support (and great neighbours!) to Richard throughout the years.