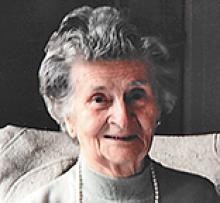 It is with great sadness that the family of Annelies Peters announces her passing on Friday, August 28, 2020.
Annelies was predeceased by her husband Jake on November 2, 1999, and by her parents and sister. She leaves to mourn her son Franz Peters and daughter-in-law Lori Cheeseman and their daughter Maya Peters, and daughter Ingrid Stewart and son-in-law John Stewart and their children, Ruth, Carl, Katherine and Laura.
Annelies was born March 29, 1921, in Kamenz, Germany. She trained in a commercial school and upon graduation, worked at the Kamenz Regional Farmer's Group in administration.
In 1945, when Russia took control of the area around Kamenz, she escaped with her sister and her sister's children (Petra and Lutz) to American controlled Germany. She then studied nursing and upon graduation, worked as a nurse in Wurzburg and Bad Kissingen.
Annelies immigrated to Canada in August 1953. She met Jacob Peters and they were married May 29, 1954. Annelies took a sabbatical while working at the Winnipeg General Hospital as it was known then, to raise her children. She returned to work, and took sick leave when she contracted Tuberculosis while working. She then returned to work part-time, and quit working a few years later. In the early 1990s Annelies helped Ingrid take care of her four children.
Annelies loved to be with family, and really enjoyed going for the day or the weekend out to the Stewart farm.
Annelies will be missed by her family and friends. She will not be forgotten.
A memorial service will take place at a future date given the current Covid restrictions.