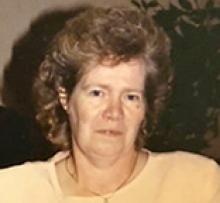 On Wednesday, September 2, 2020, at Deer Lodge Centre, Dianne Marilyn Hardy (nee Harrison) passed away peacefully.
Beloved wife of Clifford Catton Perry Hardy, for over 58 years of Winnipeg, MB.
Dianne is also survived by three daughters, Virginia Krahn, Peggy Love (Darryl), and Ruth Hardy (Don); five grandchildren, Jessie Krahn, Nolan Krahn, Brendan Love, Marissa Love, and Ashley Delure (Zack); and two great-grandsons, Carter Delure and Austin Delure.
Dianne was predeceased by her parents, John Edward Bowman Harrison and Twylla Gwynneth Harrison (nee Fletcher); and brother, Robert (Bob) Harrison.
She is survived by two brothers, Richard Harrison (Micheline) and Bruce Harrison (Cindy).
Dianne was brought up in Calvary Temple Pentecostal Church, married in St. Andrews Anglican Church, and became a member of the newly formed, Westwood Presbyterian Church; where she served on many committees and finished up as an Elder. Through the church she became a foster mother to many sick children brought to Winnipeg for overnight stays, while they attended hospital. The last child, Cecilia stayed with us for approximately 35 years till her death. Dianne enjoyed travelling and staying with the children at the lake on weekends and over the summer. In later years, before being hospitalized, she worked hours knitting and crocheting for family and friends.
She worked as a Brown Owl for the Brownies and the older girls, served on the Women's Auxiliary of the Lord Strathcona Chapter of the DeMolay boys and Past Grand Guardian of the International Order of Jobs Daughters, Bethel 13. She was also a member of four Eastern Star Chapters, serving as Worthy Matron four times, two times as Grand Representative, and lastly as Grand Esther. She also served as Worthy High Priestess of the White Shrine of America, as well as a member of the Khartum Shrine Ladies Auxiliary and the Daughters of the Nile.
At last we must thank all the staff at Deer Lodge Centre, for their compassion and empathy shown to Dianne and other residents. God bless them all.
Flowers gratefully declined. Donations may be made to either Deer Lodge Centre or Alzheimer Society of Manitoba.
A private family service will take place with Reverend Katie MacIntosh officiating.

For those who wish to sign the online
Guest Book please visit ww.chapellawn.ca