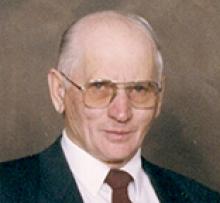 Peacefully, after a full life, was called Home on September 6, 2020. Remaining to forever cherish his memory are his daughters, Debra and Joanne (Loren Dyck); son Brian (Naomi); grandchildren, Laura (Justin Thomas), David, and Christen; and great-granddaughters, Allison Thomas and Kayleigh Thomas. He was predeceased by his wife Anne of 53 years in 2010.
Ed, the youngest of eight children, was born in Arnes, MB. It was here on the family farm that he developed his strong work ethic. From cutting wood to fixing machinery, Ed quickly developed the skills he would use later in life. However, farm life was not all hard work. Ed took time to enjoy dancing, and so it would make sense that he would meet his future wife at Fraserwood Hall. A year after their vows were exchanged, he convinced his new bride to move to Toronto where he would start Canadian Crane Rentals with his brother Louis. The business grew from a single crane to several in a short time and was credited with the crane work in the construction of The Toronto City Hall, one of the city's most distinctive landmarks.
Nine years later he and Anne would return to Winnipeg with three children and he would continue his career as a heavy equipment operator. As the years passed and as his children moved away from home, Ed once again had the desire to go into business for himself, this time as a custom home builder. After tough times fell upon the housing industry, Ed once again turned to construction work. As a highly skilled operator, he often ran equipment that no one else would or could. He loved the older machinery such as Draglines, also known as dirty circle work, which earned him the nickname "DC Outlaw". His final years in construction were spent with Nelson River and Kraft Construction.
Ed also kept busy with hobbies. He could often be found building something, however, his true passion was writing. He was accomplished in both the field of music and poetry. One of the songs he wrote titled "Lynda Morann" received airplay Canada-wide on country music stations. More recently, his poem "Gimli" took first place at the Icelandic Festival in Gimli. His submission was recognized as far away as Iceland. To his grandchildren he was always known as "Papa Ed". He dearly loved the time he was able to spend with them.
The family wishes to thank the nurses and staff at River Park Gardens for their outstanding care in the three years that Ed was with them and for their compassion in the final days of his life. The funeral service will be held on Saturday, September 12, 2020, at 10:00 a.m. at Springs Church, 595 Lagimodiere Blvd. Interment will follow at All Saints Cemetery, 4535 Main Street.
Pallbearers will be Brian Sinkarsin, David Sinkarsin, Shawn Luky and Jesse Michalski. Honorary pallbearer will be Debra Sinkarsin.