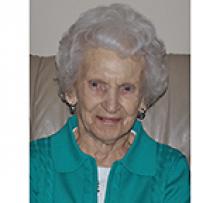 It is with deep regret that we announce the death of Margaret MacKichan on Wednesday, September 2, 2020, following a long and happy life.
Margaret will be lovingly remembered by her daughter Penny (Gaetan Joyal), granddaughter Christine (Christopher Rachel), great-grandson, Lucas, her son Tom (Pat), her sister-in-law Ethel Woodcock, and numerous nieces and nephews. She was predeceased by her parents, Tom and Grace Woodcock, her husband Ian (in 2004), sister Evelyn Boyd, and her brothers, Tom and Stan Woodcock.
Margaret was born in Minnedosa, Manitoba, weighing only two and a half pounds. It's a miracle she survived but this initial challenge must have instilled in her the determination and hard-working spirit that she exhibited throughout her life. Margaret was proud of her early life on the farm and maintained close contact with relatives around Minnedosa. After finishing her schooling Margaret moved to Winnipeg and worked with an insurance agency. She met Ian in Winnipeg and they were married in 1949. Margaret's two children were born a few years later and she took up the challenge of raising her children and running the home. This was a calling for which she was immensely dedicated and capable. Ian built a home in St. Vital in 1954 where he and Margaret lived for nearly 50 years and spent many happy times with their long-time neighbours. They moved to Kirchhoff Gardens in 2002 when Ian's health began to fail. This move was a blessing for Margaret when Ian passed away in 2004 and she was able to live an active life in Kirchhoff Gardens, playing cards, bingo and socializing with her new friends.
Margaret lived on her own until her health began to decline in 2019. She moved to Riverwood Square in late 2019 and then to River Park Gardens in May 2020 to get the increased care she required. The family would like to thank the staff at both of these facilities for their care and compassion. We would also like to express our appreciation to Dr. Helga Sickert for her care over the years.
A private, family celebration is anticipated at a date to be determined.