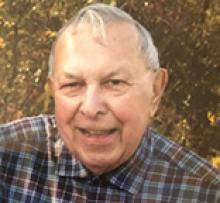 Peacefully, on September 6, 2020, with some of his family by his side, Robert Gary Abbott, aged 85, passed away at Health
Sciences Centre after a hard-fought, years long battle with ailing health. He quietly
slipped away without a fuss, just the way he would have wanted.
Gary is survived by his wife of 31 years, Gerri Abbott. He also leaves behind his sons, Kristopher (Celine) and grandson Gunnar of Seattle and Keith (Melanie) and grandson Benjamin of Winnipeg. He was deeply loved and will be dearly missed by family and friends.
He is predeceased by son Ward, brother Blaine and sisters, Jean, Vivian and Jo.
Gary was born May 14, 1935 in Swan Lake, Manitoba. He developed a love of hockey and had the skills to match. His hard work landed him a spot on the team with the Brandon Wheat Kings. From there, he was invited to try out with the NHL's Detroit Red Wings. Gary turned his hockey talents to coaching for many years with the Silver Heights
hockey team. His love of hockey remained to the end, spending many nights cozied up in his favourite chair to cheer on his beloved Winnipeg Jets. He's probably whistling a tune, barbecuing a steak and enjoying a beer with Ducky discussing what the team needs to make the playoffs this upcoming season.
Gary spent his career in Winnipeg as an
insurance claims manager for Canadian
Indemnity and later with Johnson, Higgins and Company. He loved to spend his free time fishing and golfing and spending time with
family.
He loved to travel with Gerri and they had many memorable trips to such destinations as Alaska and Europe, with one of his favourites being Bruges, Belgium. The mild weather of the West Coast called to Gary and Gerri and they spent more than 20 years enjoying island life in Nanaimo, B.C. before Winnipeg called them back home.
They enjoyed many mornings of coffee at Joe Black's and long walks in the park. Gary always had extra dog treats in his pocket and got to know all the neighbourhood dogs. He enjoyed the simple things, like an A&W
whistle dog, looking for the best Chinese food in the neighbourhood and paying it forward in the Tim Hortons drive-thru.
Gary also enjoyed keeping tabs on the Goldeyes and enjoyed many games in the stands with season ticket packs and he also loved the Winnipeg Blue Bombers. He was
always ready to debate and discuss any team, its players and what was going right and wrong with their play.
Gary fought hard with his quiet dignity and never complained no matter how much his body was failing his desire to live another day.
The family would like to extend our
deepest gratitude for the care and empathy shown at the Health Sciences Centre in his
final days. Over the years, countless more doctors, nurses, specialists and staff also
provided excellent care, particularly at the Grace Hospital and particularly Jon Einarson, who always took the time to check in on Gary and our family.
No formal service will be held. A private Celebration of Life will be held at a later date.
In lieu of flowers, please consider
supporting any animal shelter of your
choosing and keep an extra dog cookie in your pocket, a kind word for a stranger and a song in your heart.