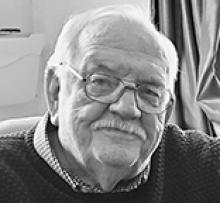 It is with heavy hearts that we announce Barry's passing at St. Boniface Hospital, with his family at his side.
He leaves to mourn his devoted wife of 56 years, Shirley; children, Sherri (Mark), James (Roxane) and Crystal (Michael); grandchildren, Connor, Jameson, Megan, Kathleen, Luke, Celeste, Porsh and Michael Jr. He also leaves to mourn his brother Raymond and his sister Judy. Barry was predeceased by his parents Elmer and Asta and by his brothers, Peter and Gus.
Barry was born in Flin Flon, Manitoba and moved to MacGregor before settling on the family farm in Westbourne. He enjoyed playing fastball for the Westbourne Tagers for several seasons and loved watching the Jays. He moved to Winnipeg, where he met his love Shirley and they were married on August 1, 1964.
Barry was active in the Plumbers & Pipefitters Local Union 254 for over 40 years, where he made lifelong friends.
We would like to express our gratitude for the care he received at St. Boniface Hospital , and to the dedicated and compassionate staff on the Palliative Care ward.
As per Barry's wishes, cremation has taken place and interment will take place at Westbourne Cemetery at a later date.

Friends and relatives are encouraged to share in a photo-tribute, eulogy, stories and condolences for the family by visiting Barry's memorial page at IntegrityFuneralPlanning.com.