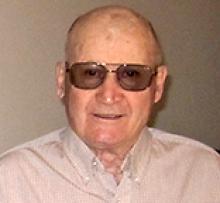 It is with much sadness the family wishes to announce the passing of Vic Martin.
He was predeceased by his wife of 57 years, Duff in 2010 and is survived by his son Doug and grandchildren, Rex and Madison.
He will be sadly missed by all of those who knew him.
Vic grew up in Charleswood and married the "girl down the street," Duff, in 1953. They moved to St. James for the balance of their married life together, although Charleswood was always special to Vic throughout the years and he maintained numerous lifelong friendships there. Vic was proud to be a 50 year member of the Royal Canadian Legion #100 (Charleswood) as he served in the Canadian Army Militia as a Bombardier in the 39th Field Artillery for several years in the 60s.
Vic worked for the CP Railway in his early years, but later joined his father Rex in 1952 at the Winnipeg Free Press for a career spanning more than 41 years. However, the railroad was always his first love and passion. Vic and Duff together, served for many years in key roles with the Prairie Dog Central Railroad and made numerous friendships there.
The Martin Family built a cottage and enjoyed many summers at Twin Beaches with their good friends the Daniels as their next door neighbours.
Vic enjoyed the outdoors and introduced his son to bird hunting which they did together for years. Throughout his life, Vic actively supported Doug with football, racing snowmobiles and other motorsports. He enjoyed sporting clays and skeet shooting with Doug and later his grandson Rex. In the last several years, Vic made many friends at the Winnipeg Trap and Skeet Club.
A special thanks to neighbours, Darrell and Darlene Presley for their friendship and assistance to Vic in the years after Duff's passing.
In keeping with his wishes, cremation and a private interment in Chapel Lawn Cemetery next to Duff has taken place.
Flowers gratefully declined, but those wishing to do so may make a donation in his name to CancerCare Manitoba.