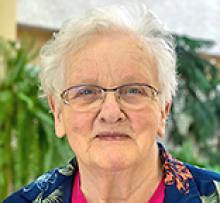 Tina, aged 86 years, passed away peacefully at Bethania Mennonite Personal Care Home, on Saturday, September 6, 2020.
She was predeceased by Henry, her husband of 54 years, in 2013. Leaving to mourn are her four children: Cheryl (Theodore Norvell) of St. John's, Newfoundland; Dale (Debbie) of Visalia, California; Wayne; and Lynne (Jim Nielsen) of Winnipeg, Manitoba. Also leaving to mourn are six grandchildren, six great-children, her two sisters, Erna and Irene, and numerous nieces, nephews, and friends.
Tina grew up with her nine siblings on the family farm in Pigeon Lake, Manitoba. She graduated as a Registered Nurse in 1957, and a year after their marriage, she and Henry moved to the farm in Ste. Elizabeth. There they raised their four children, and many chickens, pigs, milk cows, and dogs. The dogs were important companions on Tina's cross-country ski journeys around the countryside.
Tina loved farming life and especially enjoyed her large gardens, from which she fed anyone who walked in the door. (Whether they could walk out again after one of Tina's meals, is another matter.) In later years, she grew a prairie garden, which she worked hard to make self-sustaining and a legacy to pass on to future generations.
When all the children were in school, Tina returned to nursing. Despite the occasional hazard of driving home at midnight in a winter snowstorm, she enjoyed the independence and satisfaction of the work.
Tina loved to sew and made beautiful clothes for her children and herself. Also left behind are her embroidery, ceramics and egguery, many of which continue to be proudly displayed in her children's homes. In later years, she and Henry enjoyed travelling – from the Yukon to Europe, and many ski trips throughout Manitoba and the Rockies. Tina also visited her children wherever they lived, including Toronto, California, British Columbia and Newfoundland. Her enthusiasm and spirit of adventure made her a valued companion for all sorts of shenanigans, including sawing a couch in half to get it into a Toronto basement, and sewing it back together again!
Tina's love and support for her family were unwavering and unconditional. We miss her terribly.
The family wishes to thank Dr. Chris Loepp for her care and compassion during Mom's illness, and the wonderful Bethania nursing staff for ensuring Mom's comfort and dignity.
A viewing is taking place at Glen Lawn Funeral Home, 455 Lagimodiere Blvd. on Thursday, September 17, from 6:00 p.m. to 8:00 p.m. RSVP required due to Covid-19 protocols. Masks are required and will be provided at the door. A memorial will be held at a future date.
In lieu of flowers, donations may be made to Bethania Mennonite Personal Care Home.