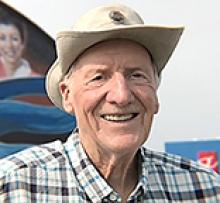 Jack Burns passed away on September 10, 2020, at the age of 87 years.
Jack was born on a homestead in McLennon, Alberta. His humble beginnings were a source of pride. "We never let hard times get us down. We were poor folks but we had love." In the early days the family moved around with time spent in Champion and Tawatinaw, Alberta. Jack attended high school in Cadomin. He had fond memories from this time especially when he worked with his father trucking coal at the age of 14.
Jack's career in the lumber industry began trucking logs to Jasper for the construction of the Jasper Park Lodge. It continued in earnest when he got a job in Edmonton with Alstow Distributors and later MacMillan Bloedel, one of Canada's largest forestry products companies at the time. His career as a salesman and later as a sales manager, was described by Jack as "a mighty fine career for my family and me." His career was about providing a good life for his family.
Jack met his wife, Patricia, in 1957 in Hawaii, an exotic destination for the times that few Canadians had visited. He would often describe meeting Patricia as a "dream come true." They would return several times with their children and later their grandchildren, to celebrate the good fortune of finding each other.
Jack knew the importance of physical activity. He was an avid curler and runner. He was a runner long before it was popular. He participated in many community running events and completed several marathons and half-marathons. He also loved travelling and combined running and travelling whenever possible. He ran on the beach in Hawaii, Florida, and Mexico, but also in more exotic places such as while touring the Holy Land. He could even count "going for a run" in Moscow in the famous Red Square. For the millenium, Jack completed his most ambitious running project; He ran 10 kilometres in every province and territory of Canada, a feat that was written about in the Running Room magazine.
His church family was important. He had numerous friends in the congregations of Woodcliff United and Charleswood United where he was a choir member and sat on many committees. He was never shy to get up in front of the congregation to make announcements which always included something to make the congregation laugh.
In retirement, Jack became a school bus driver. This was a role he loved. He knew every child by name and often spoke about them as if they were his own family.
Jack is survived by his wife Patricia (nee Snow), daughter Barbara (Bill), son Bradford (Martine); grandchildren, Jennifer, Jocelynn, Simon, and Philippe; his sister Erma; and brothers, Patrick, Ben and Wade.
A special thanks to those who in recent times offered care and friendship. In particular the family is so grateful for Karen Perez and the wonderful and caring staff of Trinity Lodge, with special thanks to Jack's health care aide, Amina Rebbaj, who went above and beyond.
A celebration of Jack's life will be held at 11:00 a.m. (Calgary), Saturday, September 26 online. The family would love all family and friends to take part. For a link to service please RSVP by visiting bit.ly/35vtU8U.
Memorial donation in honour of Jack can be made to Canadian Mental Health Association, Calgary - cmha.calgary.ab.ca.