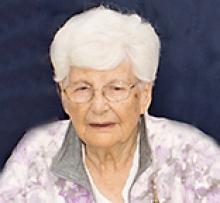 Frances passed away peacefully at the age of 90 years with her family at her side on September 10, 2020 after a short illness.
She was predeceased by her parents Ethel and Frank Haywood; her husband, Alex; sister Doris Bedore; infant son Alfred; grand-daughters Lindsay and Laurel and son-in-law Rob Easton.
She is survived by her children Sharon Arseneau (Robert) of Ottawa, Lorraine Easton of Grand Marais, MB, Shirley Bauch (Philip) of Moosehorn, MB, Norma Crawford (Robert) of Grand Marais, MB, Barry Shabaga (Sandy) of Winnipeg, MB; her grandchildren Amy Arseneau, Amanda Arseneau, Dustin Crawford (Kyra), Meagan Metcalfe (Tyler), Lindsay Clarke (Jeff) and her great grandchildren Logan, Benjamin, Emmett and Halle who all meant the world to her. She also leaves behind many nieces and nephews.
Born in Belmont, MB on April 19, 1930 she moved with her parents to Gypsumville, MB where she attended school and then taught school for a year near Moosehorn. She and Alex married on August 3, 1949. They continued to live and raise their family in Gypsumville. Frances worked for Canada Post as a Post Mistress, Conservation MB as a radio operator and Frontier School Division for many years. She also was very involved in; Women's Institute, Community Club, Local School Board, Girl Guides and Brownies and the 4H Club. She was a home maker, seamstress, gardener and the best cook ever. Her later years were spent living independently in Glencora Estates in Ashern.
The family would like to thank the staff at the Lakeshore General Hospital, Ashern and the Health Sciences Centre, Winnipeg for their care and support.
A private service will be held at a later date.
In lieu of flowers, please make a donation to a charity of your choice.