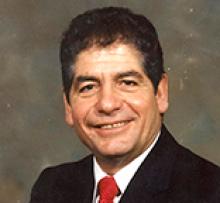 It is with heavy hearts that we announce the passing of our beloved Giovanni Colatruglio on September 13, 2020, at the age of 88.
Giovanni is survived by his loving wife Maria of 64 years, and his three children, Michele (Pam), Rita and Filomena (Rick). He also leaves behind his greatest pride and joy, his eight grandchildren, Amandalina (Tom), Johnny (Cesar), Daniella (Brenden), Marc (Taylar), Marleen (Adam), Sara (Fil) Kristina (Kevin) and Juliana, and his most recent additions to his family are his three great-grandchildren, Mia, Sophia, and Payton.
Giovanni was born January 1, 1932, in San Bartolomeo in Galdo, Italy. At the age of 16 Giovanni left for Belgium to work in the coal mines where he worked hard for three years to save money so he could immigrate to Canada. He returned back to Italy to say goodbye to his family and embarked on a new adventure to Canada in February, 1955. After immigrating to Canada, in July of 1955 he began his 38 year career at CN Rail where he made numerous friends and left a lasting legacy.
Soon after our father began writing to our mother and not long after they decided to get married and they were married by Proxy on September 1, 1956. Maria arrived in Halifax in January of 1957 and our father met his beautiful bride at the port and travelled back to Winnipeg by train together. That was the beginning of their 64 year marriage.
Giovanni and Maria welcomed their son Mike in 1960, followed by their daughter Rita and several years later arrived Filomena. They shared an incredible relationship of strong work ethics and instilling family values as they raised their family, building a solid foundation. They enjoyed weekend day trips in the summer months to the beaches with friends who were like family. They did everything together, from gardening, and wine making, to cooking and raising their children. Giovanni never missed an opportunity to take his family to a gathering. Almost every weekend was spent going to socials, and other celebrations. Giovanni loved to dance with his wife and you could always see him spinning the love of his life across the dance floor.
When Giovanni retired in 1991, it allowed him more time to follow his passion for gardening at his favourite place, "The Farm", where he not only grew vegetables, but he raised chickens, turkeys, pigeons and rabbits. He would also fill his days with daily swims at the Seven Oaks Pool and daily walks to the Garden City Shopping Centre where he would meet his numerous friends.
Giovanni had a strong passion for life and laughter and his smile would always light up a room when he walked in. He was always ready to offer a helping hand to anyone in need.

Mass of the Resurrection will be held on Friday, September 18, 2020, at Holy Rosary Roman Catholic Church, 510 River Ave., Winnipeg, MB, Condolences will be offered at 10:00 a.m., Funeral Mass at 11:00 a.m., Rev. Father Sam Argenziano presiding. Due to COVID restriction the Mass will be limited to family only. Live-streaming of the Mass will be made available on the Holy Rosary website www.holyrosarychurch.ca. Entombment will take place at Queen of Heaven Mausoleum, 3990 Portage Avenue, Winnipeg, MB.
Our family would like to extend our sincerest gratitude to the wonderful staff at St. Boniface Pallative Care Unit, who took such wonderful care of Gio, as well as CancerCare Manitoba.
In lieu of flowers, donations can be made to CancerCare Manitoba.

For online condolences or to light a
memorial candle please log on to
www.mosaicfunerals.ca