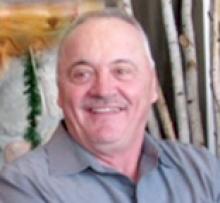 It is with heavy hearts that we announce the unexpected passing of Neil Thage on September 14, 2020.
Neil was born September 10, 1953, in Stettler, Alberta to Theodore and Doreen Thage. They moved from Alberta to Manitoba when he was 11 years old and settled in the Ashern area to farm. Neil worked for Manitoba Highways his whole life, starting on the Survey crew and he retired as Project Manager in 2012. The job he never retired from was farming, which he did till the day he died. Days before his passing he said to his wife, "You know, I love combining".
On September 28, 1974, he married Joanne and they raised two children together: a daughter Cortney and a son Nolan.
Neil had a passion for hockey and golf. He coached his son's hockey team for years then became the General Manager of the Lundar Falcons. Anyone who knew him knows what a loyal Habs fan he was. Neil also enjoyed golf and even got a hole-in-one... twice! Every winter he would go away for two weeks golfing which he looked forward to all year. He was a kind, loyal man known for his big heart, great sense of humour and love of animals. He was always bringing home some animal in need. He also deeply loved his dog Oliver. He will be greatly missed by all who knew him.
He leaves to mourn his wife Joanne; daughter Cortney (Rob) and son Nolan (Dana); mother Doreen; brother Wayne (Glenda), and grandchildren, Theo, Aubrey and Hadley. He was predeceased by his father Theodore Thage and will be laid to rest beside him.
A private graveside service will be held on Sunday, September 20, 2020.
For those who wish to participate in a drive-by procession, please meet at 1:00 p.m. in the Ashern Central School parking lot Hwy. #325 East. A lead car will take you past the Ashern Gospel Cemetery to say a final goodbye as Neil is laid to rest.