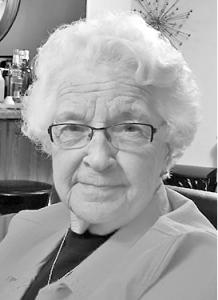 TIBBETT: On August 21, 2020, Anna Marie Tibbett passed away at the age of 89 years. Anna was born June 29, 1931 at Carman, Manitoba, the second youngest in a family of ten. At the age of 10 her family moved to Wingham, Manitoba where she received her education. On November 15, 1952 Anna married Ross Tibbett at Elm Creek, and they began farming with Ross's father Orval. In 1966 they purchased the farm west of Neepawa where they raised their family. Anna was active in the W.I., Beautiful Plains Ag Society, and bowling leagues. She enjoyed sports and spent countless hours cheering on her sons and later her grandsons in baseball and hockey. Curling was also a favorite and she could often be found coaching from her chair. Anna loved the company of family and friends and was always interested in what everyone was doing. There was always coffee or a meal for anyone stopping in, along with a good visit. As her family grew further away Anna spent hours on the phone keeping in touch with siblings, nieces and nephews. In 2014 Anna moved from the farm to Elks Manor where she enjoyed making new friends, the activities, and especially the gang on the sixth floor. Left to cherish her memory are her sons, Gary (Donna), Glen (Cindy), and Murray (Alayne); grandchildren, Melanie (Jeff), Brandy, Chris (Tasha), Corinna, Mark, Cameron (Kristin), Kirk (Tristyn), Drew (Nikki), and Devin (Erin); great grandchildren, Marcus, Kai, Samantha, Bailey, Katie, Jackson, Austin, Allan, Nash, Hannah, Hunter, Sadie, Jaxon, Quinn, and Lacey. Also surviving are sisters-in-law, Jean (Don) Poulsen, Norma (Vic) Lazarowich, Marj (Stan Sandulak) Lehmann, Muriel MacLean Schaf, and Donalda Tibbett; and brother-in-law George Tibbett; as well as many nieces and nephews. Anna was predeceased by her husband Ross in 1994; parents John and Frances MacLean, and Ross's parents Orval and Marjorie Tibbett; sisters, Jean (Angus Archibald, Les Olson), and Audrey (Paul) Rose; brothers, Alex (Gene), Cameron (Marie), Harold, Doug (Muriel), Earle (Pearl), Cliff (Nellie), and Hugh; sister-in-law Lorraine Tibbett, and brothers-in-law Gerald Lehmann and Roy Tibbett. A graveside service was held August 25, 2020 at Riverside Cemetery, Neepawa, with Rita Friesen officiating. Pallbearers were grandchildren Brandy, Cameron, Kirk, Drew and Devin Tibbett, and Chris Stang. If friends so desire, donations may be made to Neepawa Palliative Care, Box 1240, Neepawa, MB, R0J 1H0, or a charity of choice