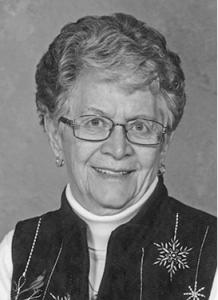 WALDON SHAW: Beverly Maxine Waldon Shaw (nee Hotham) was born April 20, 1934 to Herbert Earl and Sarah Edith Hotham in Rapid City, Manitoba. She was the youngest and only daughter with two older brothers Robert and Richard. Her mother Sarah passed in 1935 and Bev was raised by her paternal grandmother until her father remarried Lillian Hotham (nee Hayhurst) in 1942. Her childhood in Rapid City would foster a love of the outdoors and a strong sense of community that would continue for the rest of her life. She was involved with countless groups and committees over her lifetime including The Rapid City Sewing Club, The Rapid City Historical Society and the Rapid City Museum. She was also involved with the Rapid City United Church and UCW. Bev married Harry Kenneth (Ken) Waldon in 1953 and their daughter Lynn Edith was born shortly after. Ken and Bev also had a son in 1959 named Gerald Kenneth. Bev and Ken enjoyed many happy years together including working together at Waldon Insurance which they purchased in 1983. Ken's ill health prompted the sale of the business and he passed away in 1989. Bev married Larry Shaw in 1991 and they lived on the Shaw family farm near Cardale for several years until moving to Brandon in 2003. They spent many winters in Weslaco, Texas and enjoyed the times they had with good friends there. Larry passed away in 2017. Bev will lovingly remembered by family for her skills in cooking, baking, sewing and gardening. For many years she wrote a monthly column in the Rapid City Tell-it-Gram called Homemaker's Page that included recipes that the family was happy to taste test. She also happily assisted her grandchildren with many home ec and crafts projects over the years and was a constant supporter at choir concerts, plays, baseball and hockey games. Bev is survived by her daughter Lynn Klym Mills and son-in-law Drew, grandchildren Sarah (Bryce) Reynolds, Shelley (Dale) Oleschuk, Ryan Mills, Andrew Mills and Darren Mills; her son Gerry and daughter-in-law Christie Waldon, granddaughters Nicole (Derek) Green, and Kathryn Waldon. Bev adored her great-grandchildren, Adele, Mathis, Danna, Emily, Abigail, Silas, Emma and Lincoln. She was predeceased by son-in-law Robert Klym and her great grandson Clayton. Bev's family wishes to thank the staff at Hillcrest for their compassionate care in the final months of our mother and grandmother's life. She was the matriarch of our family and while we are weaker for having lost her, we are stronger for having been raised and loved by her. A private family service will take place due to current world events. Donations can be made in Bev's memory to Trinity United Church in Brandon.