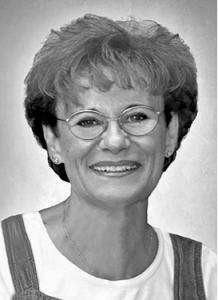 McGINNIS: Anne McGinnis (née Davey) passed away on Monday, September 14, 2020 at Fairview Personal Care Home in Brandon at the age of 77 years. She was born on September 17, 1942, in the Métis community of San Clara, Manitoba, the daughter of Henry and Vitaline (née Bouvier) Davey. Anne graduated in 1961 from École St. Agathe, where she attended convent. Following her high school graduation, she attended Teachers' College in Winnipeg, which set her on the path of her 34 year teaching career beginning in St. Rose du Lac, continuing on to Ebb and Flow, Shilo, Brandon, and Regina, where she retired from École Monseigneur du Laval. While at Teachers' College, she met Leonard Chastko and they later married in 1965, spending most of their 12 years together teaching and raising their children in Shilo. After Leonard's untimely death, Anne found tremendous strength, with the support of family and friends, to continue to raise her children as a single working mother. During a year's leave from her teaching position, she completed her Bachelor of Arts degree at Brandon University. Anne reconnected with childhood sweetheart, Lawrence McGinnis, and they were married in 1985. Living in Regina for many years, they found serenity and peace as active members of St. Michael's Retreat Centre in Saskatchewan's Qu'Appelle Valley. They were often on the road, driving near and far to be with family and friends. Their travels took them to the United States, Mexico, the Caribbean, and Europe. In addition to her parents and first husband, Anne was predeceased by siblings Morley, Rose, Gordon, Louella, Edward, and Myrna. She is survived by her children Shawne and Todd; daughter-in-law Rose; husband Lawrence and his children Sylvia, Glenda, and Brad; siblings Clara, Leo, Martha, and Elaine; 11 grandchildren, three great grandchildren, and several nieces and nephews. All of these people she loved and touched deeply. A small gathering of immediate family was held on Friday, September 18, 2020 at Rosewood Memorial Gardens where Anne's ashes were placed in a columbarium. In lieu of flowers, donations in memory of Anne may be made to Parkinson Canada, P.O. Box 21118, Brandon, MB, R7B 3W8 or www.parkinson.ca.The family is grateful to the staff at Fairview Personal Care Home for the compassion they showed Anne during her final days.