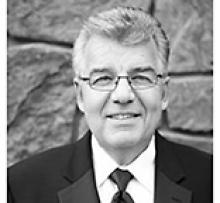 It is with profound sadness that the family of Laurie William Stafford announce his passing on Sunday, September 6, 2020, at the age of 68 years.
Laurie will be greatly missed by his wife of almost 50 years, Helen, daughters, Sherry (Jeff) and Dian (Parker), grandson Jason, granddaughter Sydney, sister Kathy, brothers, Larry (Fay), Lyle, Peter and Don, along with many nieces, nephews, cousins and friends.
Laurie was born April 30, 1952, in Moose Jaw, SK but grew up in the Interlake working jobs on farms with his brothers, protecting his sisters, and maybe getting into some mischief. He married his high school love, Helen (Whiteford), in 1970 and moved to Thompson in 1971 to work at Inco. They started a family and had two daughters. He became a welder in 1983 and remained at Inco until his retirement in 2002. He embraced northern life and loved everything outdoors, especially being in the bush. His passions included fishing, golfing, snowmobiling, chopping wood, photography, and restoring his '57 Meteor. Laurie became a self-taught master at fixing and building anything to the highest standard. Summer holidays were often spent with lots of family, including trips back to Saskatchewan where he always had a great time making huge batches of garlic sausage. Retiring to Selkirk in 2004, he could be found at many Steelers hockey games...but you couldn't keep him from the bush! He would make annual fishing trips back to the Grassy River near Setting Lake and, in recent years; he spent much of his time at their cabin in "The Ducks". Laurie loved watching his grandchildren grow and enjoyed teaching them new things. He liked watching hockey, golf...and especially his Saskatchewan Roughriders. If he was watching TV and laughing, chances are Seinfeld was on. Seinfeld references were used regularly in his conversations and he would crack up every time. He had the best sense of humour and has given his family so many great memories and stories to tell for years to come. He worked hard his entire life and loved many things, but nothing more than his family. Until we meet again, this is just goodbye for now.
Laurie was predeceased by his parents, Peter and Anne, and sister Elizabeth.
A small family gathering will occur at a later date to celebrate his life.
Thank you to Selkirk CancerCare, emergency staff, and absolute compassionate care in Selkirk Palliative.
In lieu of flowers, please remember Laurie with a bird feeder, a lilac tree, or peony in your yard... all things he loved.