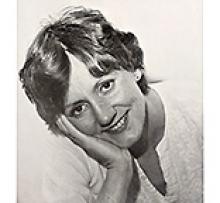 Surrounded by her daughters, in person and digitally, Nancy Jane Drake (nee Johnston) passed away on Wednesday, September 9, 2020, at Grace General Hospital.
She was predeceased by her parents, Mary (nee Kirk) (2003) and Jack (John) Johnston (1992), and is survived by her children, Keri Farr (Paul), Adam Drake, Amanda Drake, Emily Drake (Peter) and Rhea Nelken, grandchildren, Tim and Sarah Drake, William, Benjamin and Bailey Farr, sister Bonnie Cross (Omar), and many extended relatives. She also leaves behind a rich theatre and film family numbering in the thousands.
Nancy entered the world with a giant "Ta Daaaah!" on January 22, 1943 in Winnipeg, Manitoba. At the age of 19 she went to London, got married, and the couple sang in folk clubs before sailing home to Canada.
Nancy's first child was born in Winnipeg before the family moved to Sydney, Nova Scotia, where she performed in musical theatre, had a weekly folk radio show with her husband on the CBC, and welcomed the arrivals of three more children between 1967 and 1971. She moved her kids back to Manitoba in 1976, and immediately started working in the Winnipeg theatre scene. In 1983 her last child was born, making her family complete.
A single mother determined to make a living in her own town, Nancy rarely travelled for work, instead becoming a staple on Winnipeg stages, eventually performing in 28 plays for the Royal Manitoba Theatre Centre, eight for Prairie Theatre Exchange, as well as many other performances including 23 musicals. She also had well over 20 film and television credits to her name. This doesn't include her work as a director and dialect coach or as a member of several artistic boards. Nancy taught both the love and technique of theatre acting to students of all ages at the Manitoba School for Theatre and Allied Arts and the Manitoba Youth Theatre among others, not to mention countless private sessions in her own living room, helping many young students gain entry into prestigious theatre schools across Canada and beyond. While her move to Brandon to start a regional theatre in that city did not yield the desired result, she most certainly left her love and respect for craft in that community as well. Her curtain call came too quickly; she had so much left to do.
A memorial will be announced when the current global situation allows the anticipated attendance.
In lieu of flowers, please consider making a donation to the Jean Murray/Moray Sinclair Scholarship at the Royal Manitoba Theatre Centre, 174 Market Avenue, Winnipeg, MB R3B 0P8 - named in part for Nancy's aunt, Jean Murray.