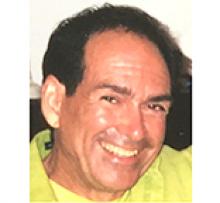 Edward Ledson Hintze passed away peacefully in Mexico on March 20, 2020, with his husband by his side.
He is lovingly remembered and deeply missed by his husband John Erskine; cousin Janice Burdon; the Erskine, Burdon and Hintze families, and many cherished friends in Canada and Mexico.
Edward grew up in Saskatchewan and spent summers at the family farm near Hughton. He attended school in Dinsmore, Rosetown and Saskatoon. After a year at the University of Saskatchewan, he moved to Toronto to study voice and pursue his talents for design, fashion and musical theatre. He also performed on tour with his show bands before settling in Winnipeg.
Edward shared his passion and gifts for singing, acting, costuming, design, and directing in a wide variety of local and national productions, events, and performances. Edward loved projects and creative challenges. Whether creating costumes, couture or curtains; putting together shows; or renovating and building, he exemplified the expression "where there's a will, there's a way" and it had to be a stylish way.
Edward met John performing in shows at the Hollow Mug. In their 30 years together, they enjoyed collaborating on construction, renovation and music making projects. In recent years, they spent happy days at their homes in Winnipeg, Mexico, and the farm where Edward grew up, blessed with the love and support of friends and family.
Edward's love for family and friends and his concern for the wellbeing of people in his professional and personal circles will be greatly missed.
A celebration of Edward's life will take place at a later date.
Donations in Edward's memory may be made to afchelps.ca or a charity of your choice.