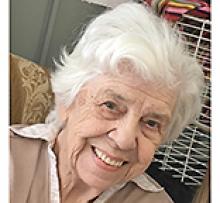 Helen Whitlaw passed away peacefully on September 10, 2020, at the Poseidon Care Centre in Winnipeg, Manitoba, at the age of 88 years.
Born in Winnipeg to Nicholas and Anna Skorodenski, Helen was a school teacher whose first teaching position was in Deloraine, Manitoba, where she met the love of her life, Robert (Bob) Whitlaw. They married and had two sons: Craig and Jamie. Helen and Bob were married for 58 happy years until Bob's passing in 2015.
Helen was a gifted artist who also loved gardening, curling, cooking and crafting. She enjoyed many summers with her family at the cottage at Victoria Beach.
Helen was predeceased by her parents, her loving husband Bob in 2015, son Craig in 2015, and sister Jean in 2016.
She is survived by her son Jamie, grandchildren, Mark (Jen), Michael (Erin), Quinn and Hannah, as well as her two great-granddaughters, Emma and Hailey.
Special thanks to the second-floor staff at Poseidon for the compassion and kindness they have displayed during her lengthy stay.
Donations may be made in her honour to the Alzheimer Society of Manitoba, 10-120 Donald St., Winnipeg, Manitoba R3C 4G2.
As per Helen's wishes, cremation and a private interment has taken place at the Neil Bardal Funeral Centre.