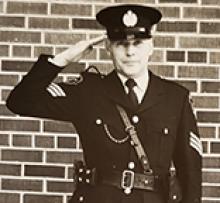 It is with great sorrow that the family announces the passing of Franklin George Holliday on September 11, 2020, at his home in Redditt Ontario.
Dad was predeceased by his wife Margaret, his parents, Alfred and Doris, and his brother Stanley.
He is survived by his four sons, Randy (Susan), Ken (Karen), Gord and Bruce (Lidia), grandchildren, Beckie (Brian), Michael (Kendra), Dana, Kayla and Claire, great-grandchildren, Zachory, Alexandria, Everett and Whitney, and his sister Marion, along with nephews, Robert, Brian and David.
Dad was born and raised in Transcona, Manitoba. Growing up, he excelled at sports. Soccer, baseball and his favourite, hockey. In 2013 Dad was inducted into the Manitoba Hockey Hall of Fame as a member of the 1952/53 Memorial Cup finalists Saint Boniface Canadiens. In 1955 after injuries cut short his semi pro hockey career in the E.C.H.L., Dad returned to Transcona and started a new career as a police officer / firefighter with the City of Transcona. After the "take over" as Dad always referred to it, he continued policing with the City of Winnipeg, proudly serving and ultimately retiring in 1987 at the rank of Staff Sergeant.
After retirement, Frank and Margaret moved to their new home in Redditt, Ontario where he spent many years enjoying time with his family and many friends. There were many fishing and hunting trips. Frank and Margaret kept active in Redditt with the community club, summer and winter carnivals, the roads board, and fire department.
In keeping with Dad's wishes, cremation has taken place and he has been laid to rest next to his beloved wife Margaret in the Redditt Cemetery. A private family gathering will be held at a later date.