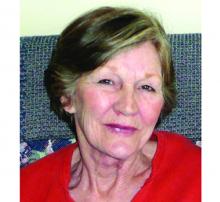 It is with heavy hearts and deep sadness that we announce the sudden passing of Sandra Cassie, age 80, of Winnipeg, MB on September 9, 2020, at the St. Boniface Hospital.
She is survived by her sons, Jim (Ann-Louise) of Canmore and Dave (Sherri) of Toronto. As well, she was Nana to six grandchildren, Aidan, Tyra, Tait, Ryan, Nate and Quinn. In addition, she is survived by several Johnson siblings, Ted, Audrey, Jim, Randy, Karen, Roger and Sonia, along with numerous in-laws, nieces and nephews. Sandra was predeceased by her parents, Byron and Elsie, sister Lyla, brother Alvin and her beloved husband, William (Bill) Cassie (2008).
Sandra grew up near Amaranth, MB on the west side of Lake Manitoba. She and Bill were married in 1961 at St. Paul's United Church in Winnipeg. They then lived across Saskatchewan and Alberta with sons, Jim born in 1962 and Dave in 1964. After their return to Winnipeg in 1966, Sandra and Bill settled down to married life, living in River Heights in Winnipeg and their cottage at Laurentia Beach. The focus was on family events including parties and dinners at the home and bonfires, horseshoe games and frog catching at the cottage, where many great memories were formed. Nana loved playing cards with the grandkids, weeding the garden and collecting flowers and plants. Sandra had recently been residing at The Waverley and Rosewood Residences over the last few years.

She was a gentle soul filled with love,
warmth, fun and as her middle name
states, "Grace". We will miss her forever.

Given self-distance restrictions in place, a Celebration of Life may be held in the future.