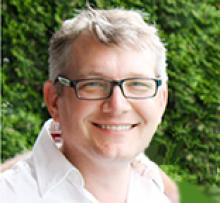 Michael Parasiuk, loving husband, father, brother, son, friend, passed away from lung cancer in North Vancouver, at the age of 50.
Michael will be greatly missed by his wife Kathryn, son Cohen, daughter Lily Jacqueline; parents, Wilma and Wilson; sister Laurel Lawry (Brian); sisters-in-law, Jacqueline Embrey (David), Terese Dalman (Lawrie); brother-in-law Greg Dagg; and nieces and nephews, Melanie, Tegan, Tim, Lauren, William, Nathan, Elise, Spencer, Murray, Christian Jack and Dylan, and family and friends around the world.
The precocious and cherished child of Wilson and Wilma Parasiuk, Michael grew up in Transcona, Manitoba, surrounded by a close extended family. His family's Central and Eastern European immigrant background played a strong role in his life; he danced at the local Ukrainian Hall until his teen years, and the hardships, hope, and cooperative spirit of the Prairie pioneers imbued him with a strong sense of social awareness and community engagement.
Michael and his sister, Laurel, whom he eccentrically nicknamed Suzy, were active in the close-knit community, visiting elders, taking part in local festivals and events, and assisting their parents with election campaigns and constituency outreach, while learning the importance of giving back, getting involved, taking responsibility, and helping others, all in the hope of creating a better world.
Throughout his youth, he had many opportunities to shine: on stage and in plays, as President of his high school, in academics, in the 400-meter race, in team sports, in public speaking, and above all, as a friend and supporter - someone who drew people into his orbit and secured them there with his intelligence, his wit, his generosity and his love. He displayed a great ability to innovate and lead in many entrepreneurial capacities, including as Manager of the family's Le Grand Splash Waterslide in the Gatineau Hills as a young man.
Moving to Vancouver in 1989 to join his parents and sister, he maintained close relationships with his many friends and family members despite any distance between them. Simon Fraser University's activist history and grassroots community resonated deeply with him and he flourished as a writer and editor at The Peak newspaper, a host at the student radio station, all the while deepening his belief in social engagement and political action. His Political Science degree set the foundation for what would become a lifelong career in the public service, ultimately as a Policy Analyst and Adjudicator for the Residential School Settlement Process.
In 1991, he met an Aussie beauty in Whistler, and they eloped that year in Tofino - a wedding party of two despite both being extroverts who valued family and friends above all. Michael and Kathy created an active life for themselves and their two children, variously setting down roots in Ottawa, Wakefield, and Quebec City, before finally returning to North Vancouver to be closer to their family.
Michael's analytical mind always led him to question the establishment. He was not a believer in organized religion but he had great faith in people themselves making our world a better place. He found his calling as a Federal Public Servant, and was able to give back in his work as an analyst in the civic and social sector. Selected for the Manager Development Program, he was stationed in various federal departments across Canada. He was forever affected by his work with Indigenous communities in remote areas of Western Canada, as an adjudicator for the Residential School Settlement Process. He was a vociferous lifelong supporter of the New Democratic Party and worked on election campaigns for local candidates, recruiting his own children to carry on the tradition of alerting the next generation to the importance of grassroots involvement and political debate. He also participated with his children, sister, wife and nephews in preserving Ukrainian culture and traditions, finding another family in the Association of United Ukrainian Canadians and dedicating himself to its success by giving his time in countless ways and working on several different committees, including as a Director of the Lesya Ukrainka Senior Manor Board, the Vancouver Branch Executive and the National Committee.
His smile and laughter were infectious; he drew people to himself through good cheer, great stories and genuine curiosity. He will be missed by all who knew him.
"Courage, my friends; 'tis not too late to build a better world," said Tommy Douglas.
A memorial fund has been established by his family to support future SFU students who share Michael's passion for community building and activism. You may wish to consider making a gift in his honour. www.give.sfu.ca/MichaelParasiukMemorialFund.
To share your memories of Michael and find more information about the funeral service go to www.dignitymemorial.com.