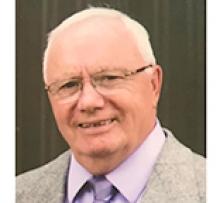 It is with profound sadness that our family announces the sudden passing of our beloved father, grandfather and great-grandfather, Calvin Johnston, aged 83, in the early morning hours of September 11, 2020.
Cal was born on November 28, 1936, at the old Grace General Hospital in Winnipeg, the only son of Helene Mae and Ralph Johnston. He grew up in the family home on Ingersoll Street, in the West End, with his sister Delores. He attended Greenway and General Wolfe schools, and then went to Daniel McIntyre Collegiate.
Following in his father's footsteps, Cal began his career in the automotive repair business in 1953, when he became an employee of Furby Motors and Supply Co. Ltd. It would be the beginning of over 40 years of continuous employment and result in a cherished friendship and close partnership with owner, Kenneth James Main 33°. Ken and Cal enjoyed many working years together, and under Ken's leadership, experienced great satisfaction as their joint efforts created long term success for the business.
On July 4, 1959, Cal wed the love of his life, Marilyn Pricilla Eager. Together, they enjoyed 56 years of marriage. Along the way they were blessed with two sons and a daughter; four grandchildren; and two great-grandchildren. They established family homes in the Crestview and Whyte Ridge areas where many neighbours became life-long friends.
Masonry became an important part of Cal's life, starting in 1965 when he joined the St. James Masonic Lodge #121. He then became a member of The Scottish Rite of Freemasonry in 1969, serving as Thrice Puissant Grand Master in 1982. Cal was awarded the Walter C. McDonald medal for Meritorious Service to Scottish Rite in 1990 and was elected to the office of Almoner in 1996, retiring in 2012. Cal received the distinct honour of being coroneted, an Honorary Inspectors General 33°, at the 1985 Supreme Council in Sessions in London, Ontario. Cal is a very proud member of the Royal Order of Scotland achieving the office of Provincial Grand Master in 2008. He was also a strong supporter of the Masons Care Program and volunteered a portion of his retirement time driving patients to and from cancer treatment centres.
Cal was predeceased by his parents, his sister, and in 2016, his wife Marilyn. He is survived by his sons, Bradley (Hazel) and Stephen (Barb); his daughter Barbara Jean (Johnny Froese); his grandsons, Trevor Johnston (Keanna), Keith Johnston, Cody Froese (Shai); his granddaughter Becca Blanke (Andy); and his great-granddaughters, Hadley Froese and Maisy Blanke.
A private service will be held by invitation only due to COVID restrictions. The service will be live streamed on Monday, September 21, 2020. Please go to www.neilbardalinc.com to locate the obituary listing, where the link to the webcast will be found under the Photos and Videos tab. The family will be hosting a reception at a later date.