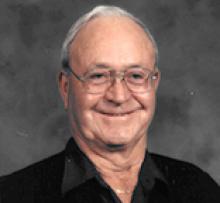 It is with great sadness that we announce the passing of Tom Brisson at 94 years of age.
That morning Tom joked with staff, ate a big breakfast, fell asleep in his chair, and peacefully left this world.
Tom was born in Otterburne, Manitoba to parents, Joseph and Rose Brisson.
Tom had an incredible work ethic and was always willing to do the hard work. When he was in his eighties, we had to confiscate his belt and spurs so that he would not scale trees to trim them anymore. Tom worked at Winnipeg Hydro for 38 years. He started at Hydro shoveling coal in the steam plant, worked as a Lineman for many years, and ended his career as the Manager of the Overhead Department.
Tom had a great love of sports and was a good athlete in his own right. He was inducted into the Manitoba Football Hall of Fame in 2013 and the Manitoba Sports Hall of Fame in 2015, which was a proud day for all of his family. You could always see him sporting his favourite Jets jacket or Bombers hat and watching his favourite sporting event. He loved to play a rousing game of crib, especially when he won!
Tom loved to travel and did so extensively with his first wife Gladys and his second wife Mavis.
Tom's family was everything to him and he was always there to support them whether it was home renovations, cheering on his grandchildren in the stands or attending recitals and graduations. He will always be remembered for his love of his children, his kindness and his generosity. We will love you always.
Tom was predeceased by his first wife of 41 years, Gladys; son Richard; and siblings, Eddy, Edith, Albert, Annette, Ray, and Jean.
Tom will be deeply missed by his loving wife of 27 years, Mavis; son Wes (Joy), daughters, Val (Perry) and June (Brad); stepdaughters, Carol, Pam (Terry), and Colleen (Dan); grandchildren, Jolene (Dave), Steven (Sydney), Jerrica (Evan), Janelle (Sang), Scott (Michael), Jason (Alexa), Tayler (Darryl), Leah (Jeff), Carlie (Aaron), Avery, Gaby, and Anthony; great-grandchildren, Connor, Cayden, Tyla, Charlie, Blake, Carter; his sister Olive; his brother-in-law Gerald (Anne); sister-in-law Marlene; and numerous nieces and nephews.
Due to the current health situation, a small service will be held by invitation.
Tom's family would like to extend a special thank you to the staff in CD2 at Riverview Health Centre for the extraordinary care Tom received over the last year and a half.
In lieu of flowers, donations may be made in Tom's memory to the CD2 Unit, Riverview Health Centre, 1 Morley Ave., Winnipeg, MB R3L 2P4.

Family and friends may sign a
Book of Condolence at www.glenlawn.ca