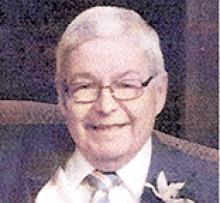 It is with profound sadness that we announce the death of Edward (Ned) Demaray Brown after a lengthy and courageous battle with heart disease at the age of 78. It brings us great comfort to know that Ned passed peacefully.
Ned was an award-winning lawyer and an expert in real estate law. In addition, he was a well-known specialist in the life and times of Sir Winston Churchill as well as being a loyal friend to the countless number of people he met along the way. Ned was a proud, active member of Phi Delta Theta fraternity and lived in the fraternity house for a period of time. He was a master problem solver articulating his reasoning skills with knowledge, perseverance and determination. He loved the law and was honoured for his long-standing commitment to the profession (53 years) by the Canadian Bar Association.
Ned was married to Pam Brown for 40 years. They married in 1971. Ned will be greatly missed and lovingly remembered by son Myles and daughter Kelly DeClercq (Brad); sister Nancy Bell (Rob); and the blending of three additional siblings, sister Lynne Ransby (Gerry Hodson) and brothers, Ted Ransby and Ken Ransby (Sally Flintoff) - with the marriage of their beloved parents, Edward and Margaret. All five children have enjoyed a deep, close, loving relationship with each other and have remained in constant communication over the years.
Some of the Ned's fondest memories were at the family cottage at Hillside Beach on Lake Winnipeg. Friends and relatives would get together for parties and storytelling where Ned would be known for his self-professed twisted sense of humour. Ned was known to create great laughter and respect for his presentations of Churchill speeches and his in-depth knowledge of the history of western civilization generally and the world wars specifically.
"Kelly and Myles had a special relationship with their dad. So many fond memories and inside jokes will live on." He has shaped so much of who they have become today.
Ned remarried in 2018 to Judie (Davies) and together they shared many happy adventures and memories of hot dog parties, train rides and farm trips with grandchildren, Charlie and Luke and parents, Shane and Kati Devlin.
Ned was born in Winnipeg in 1942 and later moved to Regina, where he developed his intense love for the Saskatchewan Roughriders - who have now lost one of their biggest and most vocal fans. He then moved to Calgary and finally back to Winnipeg to finish high school at Vincent Massey Collegiate where he delivered the first valedictory at the graduation ceremony. Ned was active in sports playing football for the Fort Garry Lions and basketball for the Vincent Massey Trojans. Both teams he played for are honoured in the Manitoba Sports Hall of Fame.
Ned commenced practicing with the then Winnipeg law firm of Asper Freedman and had remained with the firm and its successor firms - currently Pitblado LLP - ever since. Ned's practice was primarily in the areas of subdivisions and commercial real estate development, leasing and financing and secured debt financially generally.
Ned's profile as a legal writer and instructor was extensive. He taught the Solicitors Transactions course at the Faculty of Law for 18 years. Since 1989 he has been a presenter for the Law Society of Manitoba and the Manitoba Bar Association on a variety of topics. He has written several admissions to the Manitoba Law Reform Commission, served 20 years as co-chairperson of the MBA Real Property Section. He was awarded the Headnotes & Footnotes Award for his outstanding contribution to the MBA newsletter on several occasions. Ned was recently named to The Best Lawyers in Canada List for 2021 and "Lawyer of The Year" in Winnipeg in Real Estate Law (2021 Edition).
Thank you to Ned's amazing friends held dear to his heart throughout the years and who remained in close contact throughout his illness. Thank you to Kathy, Ned's longtime, excellent legal assistant, friend and advisor from Pitblado. To Mark Boroditsky, we thank you for your professional medical skill and knowledge in treating Ned's various health concerns. Special thank you to Dr. Tam and Rose from the Heart Failure Clinic at St. Boniface Hospital for your constant willingness for contact to support Ned and help keep him comfortable during his illness. To Palliative Care Manitoba, we thank the dedicated team who provided outstanding support with equipment, medication and great ideas to problem solve the many issues that surfaced. Thank you all so very much!
To Ned, we love you and miss you and will forever remember your intellectual humility and honesty and gratefully acknowledge your moral and ethical dedication to the law and all the ones you loved.
In lieu of flowers, donations may be made in Ned's name to St. Boniface Hospital Research Foundation.
A family Celebration of Life will be held at a later date.