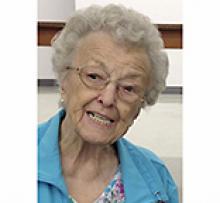 Sophie passed away peacefully on September 14, 2020, at Park Manor Personal Care Home.
She was predeceased by her husband Fred on November 6, 2003, her mother Nellie and father John; sister Jessie (late Jim), brothers, Mike (late Ollie), Steve and Bill; great-granddaughter Molly, nieces, Marlene and Elizabeth, and son-in-law Ron. She is survived by her daughter Evelyn (Glen), grandchildren, Dr. Rhonda (Aaron), Lynne (Peter) and Fred Jr. (Christl), great-grandchildren, Kalin, Keegan, Sebastian, Mira and Declan, brother Tom (Iris), sister Olivia (late Earl), her dear friend Barbara, many nieces and nephews, and Douglas (Olivia).
Sophie was born and raised in Springfield Municipality, the daughter of immigrants from Ukraine. She was very proud of her Ukrainian heritage. She enjoyed events at the Ivan Franko Hall on Lorne Hill Road when she was growing up. She was an avid cook who instilled a love of Ukrainian food in her children and grandchildren, and she made sure her granddaughters knew how to polka. Though she couldn't make the trip herself, she was excited when Rhonda and Evelyn travelled to western Ukraine in 2000 and brought back photos and video of her mother's village. After she retired, she took part in perogy making at St. Michael's Ukrainian Catholic Church on Fridays and was a member of its Friendly Settlers Seniors Club, where she enjoyed Monday cribbage and bingo games. Indeed, she was an avid card player and difficult to beat! She particularly enjoyed the Monday night cribbage at St. Michael's Villa, where she made her home from 2009 until 2019, when she relocated to Park Manor Personal Care Home.
Sophie loved nature and the great outdoors. After her retirement from St. Boniface Hospital, she and Fred spent many hours in Birds Hill Park hiking or snowshoeing the trails watching for deer and rabbits. She was happiest at her cottage in Sandy Hook, which she and Fred built themselves. She was extremely disappointed that she could not spend time there this year.
Sophie loved to travel. She and Fred took trips to Hawaii, Mexico, and around the continental U.S., including the Black Hills, Nashville and Florida. They also travelled extensively throughout Northern Manitoba and Western Canada, took a cruise to Alaska, and enjoyed cross-border shopping trips to Grand Forks, Fargo and Minneapolis. She went several times to Hamilton, ON to visit Rhonda when she attended McMaster University and to the Ottawa area where Rhonda lived and worked for a period of time. In her later years, when she could no longer travel, she enjoyed going shopping and out for coffee and wafer pie at Salisbury House.
Her greatest treasure was time with her great-grandchildren. When great-grandson Sebastian was told of her passing he said, "I am going to miss that senior!"
The past few months were difficult for Sophie, as the COVID-19 pandemic prevented family from taking her on outings or visiting as much. We are grateful to the staff at Park Manor for setting up weekly video calls and outdoor visits to help maintain contact with her.
Cremation has taken place and honouring Sophie's wishes no funeral service will be held.
The family would like to thank the staff at Park Manor Personal Care Home for the care she received during her residency.
In lieu of flowers, donations may be made in her memory to the Women's Health Clinic, 419 Graham Ave., Unit A, Winnipeg, Manitoba R3C 0M3.

"When the one we loved becomes a memory, the memory becomes a treasure."

Sophie and Fred - "Together Again"