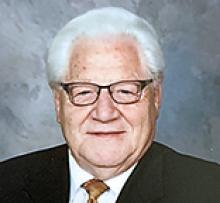 It is with deep sorrow that the family announce the passing of Peter, aged 75, on September 12, 2020, after a courageous battle with cancer.
He will be sadly missed by his beloved wife Diane, of 25 years; sons, Andrew and Frederick (Amelia) and granddaughter Teeka; stepdaughter Alina (Dan) and stepson Richard (Lorena); stepdaughter-in-law Marissa Michurski and son Karl Erhardt; stepgrandson Anthony Costello, with family and friends in Germany and Canada.
Peter was predeceased by his mother Alfrieda Knoedler and his stepson Joe Michurski.
Peter was born in Germany and immigrated to Canada in 1965. He was a man of many talents and seized many career opportunities. He worked in a gold mine in Bisset; owned and operated a restaurant in Lac du Bonnet, where he amazed his patrons with his culinary skills. Moving to Winnipeg, he became the Western Regional Manager of Pic a Pop.
Peter became a devote member of St. John Cantius Church, where he participated in the Polish Mass as Eucharistic Minister and usher. His greatest achievement however, was establishing his own company business where he was a long time and valued Canada Post supplier of transportation services, and proud of it.
The family would like to express their thanks and gratitude to Fr. Henry Laciak, Fr. Yolando Gamallo; the dedicated doctors and nurses at Concordia Hospital and at Riverview Health Centre, who provided care and compassion.
A private service will be held for family only.
In lieu of flowers, a donation can be made to CancerCare Manitoba.

You have fought the good fight, finished the race and kept the faith.