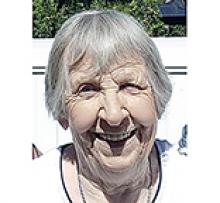 Eleanor Krenz, 87, of Winnipeg, peacefully passed away on September 13, 2020, with Paul, Lorne and Tyler by her side.
She was born in Rhein, Saskatchewan February 21, 1933 to Jacob and Eva Streck. Eleanor married Adolph Krenz in 1962.
She was predeceased by parents, Jacob and Eva Streck; husband Adolph; brothers, Wilhelm, Henry, David, Victor and Jack; sisters, Frieda, Emily, Mary, Molly and Leah; nephew Lloyd; nieces, Joan, Shirley and Judy; in-laws Gottlieb and Martha Krenz; sisters-in-law, Alice, Pearl, Lydia and brothers-in-law Robert Krenz, Earl Williams and John Propp.
She was the last surviving member of her family.
The biggest joy in her life was her grandson Tyler. Nana and Tyler had a special bond and cherished the time they had together.
Mom started working after graduating from Yorkton Collegiate in 1952, moved to Winnipeg in 1956, and continued to work until the fall of 1967.
Paul was born in May 1968, where the volunteering began, mostly at church, and continued after Lorne was born in October 1971. She was a stay at home Mom until Lorne was in junior high, where she volunteered at Chief Peguis Library just short of five years before taking a part-time job.
In 1988, she began working full-time for Minuk Insurance and worked in this office just short of 15 years. Trying to retire more than once, she enjoyed her time in this job, and officially retired in 2002. Many friends were made wherever she worked.
Volunteering began again in 2004 at Good Neighbours Senior Centre, being awarded the Above & Beyond award in 2016 which she was so proud of, Kimberly Grace Seniors Club in 2005 and Trinity Food Pantry in 2006.
Mom started bowling in 1958 along with Dad, and continued until 2015. Eleanor was active in the church, enjoyed her garden, bingo, baking, spending time with family and friends (even the furry four legged ones), and will be remembered for her hospitality.
Eleanor is survived by her two sons, Paul, and Lorne (Laura) and grandson Tyler; sisters-in-law, June Streck of Yorkton, SK, Elsie Propp of Winnipeg, MB and Joy Krenz of Calgary, AB. She also leaves behind numerous nieces, nephews and friends.
Special thanks to the staff at Concordia Hospital and St. Boniface Hospital for their care of Eleanor.
Donations, in lieu of flowers, can be made to Grace Lutheran Memorial Fund.
A private service will be held on Tuesday, September 22, 2020.