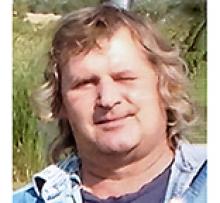 Passed away unexpectedly on September 16, 2020, at the age of 61.
Randy was born in Steinbach, Manitoba on April 6, 1959 - the fourth son of Edgar and Ellen (Peters) Penner. The family moved to Kola, Manitoba in June of that same year.
He attended elementary school in Kola and high school in Virden. During these years, he raised chickens and ducks, building his own chicken coop and hatching eggs in his homemade incubator. He knew precisely how it needed to be set up and operated. With a little smile, he would call his chickens while walking to get on the school bus because he knew it embarrassed his siblings when the chickens followed him right up to the bus each morning!
Growing up, Randy spent much time with his younger siblings teaching them about many of life's finer things. His love of nature and animals, being an avid reader and talented wood carver - he was always working on something creative. He fascinated the younger kids with nature walks, stories and crafts. He enjoyed cruising back country roads, deep discussions, and bonfires with close friends. And he loved ketchup on everything!
Family trips to California and Alaska were highlights for all of us, and provided fodder for many laughs through the years. Closer to home, summers spent at Clear Lake and Cranberry Portage, the family living in Norway House for a year, and fishing trips with the brothers to northern Manitoba all created many great memories.
Whatever Randy did, he went all in. He spent hours in his room learning to play guitar and was very talented. Randy, brothers, Lawrence and Tony, and friends, Tom and Troy, started a band, and honed their music skills playing local events. Once ready, they fixed up an old city metro bus and hit the road. For three years they travelled through Saskatchewan, Manitoba and northern Ontario entertaining the masses. This was a highlight in Randy's life that he truly loved.
As time moved on, Randy settled into house and commercial painting. He was well known for his talent with brushes and rollers, and for superb woodwork finishing. He took much pride in providing clients with the smoothest surfaces. His most recent project was painting the new church addition and was just putting on the finishing touches.
Although Randy was a very private person and preferred time spent at home, he was popular with his nephews and nieces as one of the "cool" uncles, with his long blonde hair and rock T-shirts, and he took much interest in their lives. During the numerous family gatherings over the years (except in 2020!), there was lots of catching up to do. He generally could be found conversing with the younger crowd and wanting to know what they were up to.
He was a kind and gentle man, and helped many friends through tough times with his sensible advice and offering a shoulder when needed. He always saw the good in people.
Randy is survived by his parents, Ed and Ellen Penner of Virden, siblings: Greg (Diane) Penner of Kola; Travis (Rose) Penner of Virden; Bob (Martha) Penner of Kola; Lawrence (Becki) Penner of Kola; Tony (Angela) Penner of Maryfield; and Angela (Dieter) Meier of Brandon; nephews and nieces: Brett Konkin; Allister (Rachael) Penner - Adrian and Annika; Conrad (Shantelle) Penner - Seth, Amelia, Lilly, Milo; Zac (Lacie) Penner - Swade, Blaze; Derek (Janine) Penner - Xander, Tristin, Mya, Avery; Nick (Melissa) Penner - Aria, Macy, Lexi; Tyarra (Jason) Barker - Chanel, Bria, Saige; Danny Penner (Sarah Bloomer) - Isabella; Rhett (Brittny) Penner - Roman, Gunner; Dillon and Samantha Penner; Paige Ostroman, Thomas and Michelle Meier; as well as numerous aunts, uncles and cousins.
He was predeceased by nephew Steven Konkin; paternal grandparents, Abram and Mary Penner; maternal grandparents, Jac and Maria Peters, and Tina Peters; several cousins, aunts, uncles and friends.
Randy's struggle with addiction was known, and he talked about it more openly the last few years. Time spent at Adult and Teen Challenge was life changing for him, where he rededicated his life to Christ. His love for reading had him going through their library to provide opinion as to which books were theologically sound. Once back home, he started attending the local church alongside his parents and other family members. His favourite seat will be noticeably empty in days to come. We are grateful to all for their prayers and concern over the years. Family and friends can take solace knowing that Randy knew where he was going and was ready to meet his Maker. We are confident that he has been welcomed to God's Table with open arms.

Randy - you were loved by many, we will miss you greatly, and know we will meet again!
"You are at peace, your soul's at rest, there is no need for tears.
For with your love we were so blessed for all those many years." - Unknown Author

A time of viewing will be held at G.R. Carscadden Funeral Chapel - Virden from 7:00 p.m. to 9:00 p.m. on Wednesday, September 23. A private funeral service will be held at Kola Evangelical Mennonite Church. Interment at Kola Evangelical Mennonite Cemetery.
If friends so desire, memorial tributes may be made to Teen Challenge - 414 Edmonton Street, Winnipeg, Manitoba R3B 2M2 in memory of Randy.

E-mail messages of condolence or sign the online Book of Condolences at
www.carscaddenfuneralchapel.com