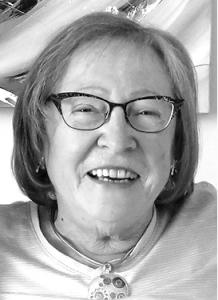 DODDS: Rita Jeannine Josepha Dodds passed away in Brandon, Manitoba on August 26, 2020 at the age of 72. She was born in Onze-Lieve-Vrouw-Lombeek, Brabant, Belgium on May 28, 1948; the youngest of six children by 10 years. Following two brothers and a sister who had already immigrated to Canada (Manitoba) in 1953 and 1954, Rita and the remainder of the family arrived by boat in 1955. Speaking only Flemish, Rita had to learn English. The family, including a cherished dog 'Tippy', settled on a farm in Belmont where she remained until finishing her schooling and moving to Brandon in the 1960s. Rita was incredibly shy by nature but was also driven and completed numerous post-secondary office administration-related courses. Her first course, "Clerk-Typist", led her to Royal Bank of Canada in the late-1960s where she remained as a dedicated employee until retirement. Rita found more than gainful employment at the bank, however. The beautiful redhead caught the eye of a courageous client there, 'Jack' Dodds. Rita and Jack went on to marry in 1969, settle in the house that they'd live in for the rest of their lives in 1972, and soon start a family; a son, 'Brad', born in 1974 and a daughter, Amber, born in 1975. Jack and Rita would go on to celebrate 48 years of marriage and adventure together. Rita was always very smart and could also be very lucky with games of chance. In 1969, she was randomly chosen to be a contestant, and appeared, on the nationally televised quiz show, "Windfall". Rita won big on the show and went on to win in Bingo seven times on her trip home. Rita liked to entertain herself with reading and playing card and board games in her spare time, but also enjoyed spending time with family and friends, gardening in cool weather, volunteering, and traveling. She volunteered with the Optimist Club from 2009 to 2018 serving as a Member, Vice-President, and President for which she received Outstanding Membership Recognition in 2014. Rita volunteered with Seniors for Seniors Cooperative, a place both cheerful and at times uniquely challenging for her, as a Member and Treasurer from 2015 until her death. She had an adventurous spirit and longed to see more of the world. Rita and Jack explored Canada, the United States, and Mexico together. She traveled to Belgium with her sisters in 2006, China as part of a tour group in 2014, and Spain, Portugal, and Morocco with her daughter in 2019. Rita enjoyed many things, but she cherished her friends and family most. She was devoted, nurturing, and supporting to those around her through all of their ups-and-downs, even when confronted with her own 'downs', such as Jack's passing in 2017 and her first diagnosis of cancer. Rita was first diagnosed with Nodular Melanoma in 2017 but, after the excision of one growth, no additional treatment had been recommended and no additional problems had been found at regular follow-up visits. It was surprising, then, when she was told in May, 2020 that the cancer had returned, and even more surprising when she was told in June that it was terminal. Rita had hoped and fought for much more time to live, and we'd hoped for the same; time for her to do and experience more in life, and time for her to spend with her family. Sadly, not even the strength of this 'strong Belgian woman' could overpower the aggressive type of cancer she had been diagnosed with. Rita's thoughts were always with others much more so than with herself. She was selfless, kind, caring, loving, thoughtful, encouraging, patient, generous, spirited, resilient, and so much more, but it's impossible to summarize someone so incredible into just a few words. Rita was incredibly special to her children and so many others and will be sorely missed and remembered for being the extraordinary woman that she was. She's survived by her children Brad (Heather) and Amber; grandchildren Colton Dodds, Jordan and Jamie Lajeunesse; brothers Joe (Mary Lou) and Steve Van Schepdael; sisters Godelieve Bennet and Emily Van de Bennet; and extended family. Rita was predeceased by her husband Jack; parents Emile and Josephine Van Schepdael; sister Christianne Van Schepdael; brothers-in-law Frank Bennet and Joe Van de Bennet; 'sister-in-law' Lauretta Hardy; and extended family. The Ceremony to Celebrate Rita's Life took place at Memories Chapel in Brandon and, due to COVID-19 pandemic public gathering size restrictions, was also live-streamed on September 4, 2020. Interment took place at the Brandon Municipal Cemetery. Urn bearers were Brad and Amber. For those wanting to donate in Rita's memory, donations to the Canadian Cancer Society (Nodular Melanoma)/Brandon Regional Health Centre (Palliative Care) would be appreciated.