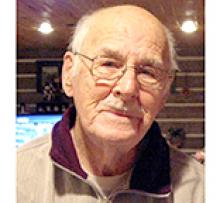 On March 30, 2020, during these unprecedented times, we lost an amazing man who loved his family, missed his wife and was a proud Veteran who had served his country.
"Bill" Barker was born May 5, 1923 in Winnipeg and lived his entire life in Fort Garry. He had many connections with his community, neighbours and family. Married for 71 years to his love, Viola, they had four children who are left to mourn his loss, Warren (Val), Charlene (Larry), Karen and Neil (Liz); grandchildren, Brad (Colleen), Cam (Alana), Jordan (Hayley), Erin (Bill), Loren, Jared (Hollis), Kelsey (Jake) and Tanner (Malea); great-grandchildren, Addie, Callum, Harvey, Nolan, Aiden, Zane, Averee and Araiya.
Bill was predeceased by his wife Vi; parents, William and Elizabeth; brothers, Jack, Stan and sisters, Eva and Cec.
Dad served our country in the Second World War in the Canadian army with the Queen's Own Cameron Highlanders. He was assigned as a sniper, stationed in various European countries. Having been injured in the war, he returned to Winnipeg and later joined the Winnipeg Postal Service where he worked for 32 years, retiring as a Postal Supervisor.
Dad was dedicated to sports and coaching kids. He coached hockey at Victoria Community Club, managed the Fort Garry Twins and Monarch teams and was one of the founding members and coaches of Little League baseball on the west side of Fort Garry. For all of this work, a street was named in his honour. "Barks Way" can be found on the street entering Fort Garry Community Club.
In his retirement, Dad loved to watch his grandkids hockey games, baseball and his beloved New York Yankees! You would often find Dad sitting on his back patio soaking up the sun and loved to have family or friends drop in. He always had a beer or homemade wine to offer or Crown Royal for those "special" guests. He was known in the neighbourhood for his pristine trimmed trees along the front boulevard. He trimmed them himself until well into his 80s when he made sure his son kept it up.
The last few years were difficult for Dad and Mom as they required long-term care. Fortunately, they both became residents of Deer Lodge Tower. Dad was on Tower Four where he received excellent care and compassion from the nurses and staff and we thank them very much for all they do.
We especially want to thank Merna Bowes who assisted Dad in his final year and became a friend and liaison to the family for dad's care. She is an angel to those she cares for!
Dad taught his kids to work hard, play hard and live life to the fullest. You are deeply loved and sorely missed Dad.
In these crazy times, interment will be private to immediate family. We just want Dad to be back with Mom where he belongs...