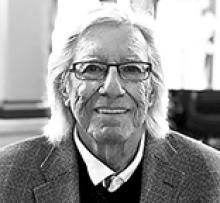 It is with great sadness we announce the passing of Leonard (Len) George Flett after a long illness. He was our beloved friend, husband, father, brother, uncle, grandfather and great-grandfather.
Len was born in Shamattawa, Manitoba, and was a proud member of the Big Trout Lake First Nation in Ontario. Because of his father's employment with the Hudson's Bay Company, his family lived in various areas during his childhood, eventually settling in Cumberland House, Saskatchewan. The second eldest of 14 children, he was sent away to school at age seven, returning home only on school holidays. Though he found it traumatic to be away from his family and reserve, he loved learning and was honoured to be valedictorian of his high school class. After graduation, he was hired by the Hudson's Bay Company. He worked for the Hudson Bay Company and The North West Company for his entire career, retiring as vice-president in 2005 after 42 years of service. He was the first Indigenous Canadian to achieve such a high status in the corporate world, and for this he received many accolades and awards, including the National Aboriginal Achievement Award, the Order of Manitoba, and the Order of Canada.
In his later years, he fulfilled a dream he had of documenting his unique Canadian experience, authoring the highly acclaimed memoir, From the Barren Lands. He loved writing and wrote almost until the end of his life; he had almost finished his second book, Ekosi, before he could no longer continue due to illness. Besides writing, Len enjoyed reading, travelling, playing guitar, watching documentaries, trying new restaurants, telling jokes, and most of all, spending time with his family. He was a beloved member of the community and will be deeply missed by all who knew him.
Len was predeceased by his parents, Abigail Beardy Flett and Horace Flett, and by his brothers, Glen and Brian. He is survived by his loving wife, Marguerite; his sisters, Islay, Linda, Georgina and Kimberly; his brothers, James, Frank, Don, Harold, Gerald, Alex and Ted; his daughters, Sandra Collier (Matt), Lynda-Gale, Geraldine Horbas (David), Amber Armitage (Trevor), Harmony Bertrand (Matt) and Allison Eddybouin (John); his grandchildren, Larry, Sadie, Nichole, Kevin, Jake, James, Sarah, Nathan, Kathleen, Kyle, Nolan, Elise, Dolph, Libby, Michelle, Mary Catherine, Thalia, John Henry, Thaddeus, Arveragus, Blaise, and Agnes; his great-grandchildren, Ashton, Astrid, Zak, Reggie, Dylan, Luke, Kayleen and Shane; and numerous nieces and nephews.
Due to Covid-19 there will be no memorial service at this time.
In lieu of flowers, gestures of condolence can take the form of a donation to Indspire.