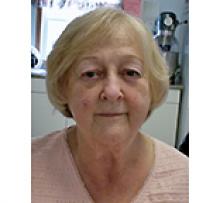 It is with great sorrow that we announce the sudden passing of Evelyn Eyolfson (nee Schultz), of Lundar, MB, on Friday, September 11, 2020, at the age of 77 years.
She is survived by her husband Bill; children, Mark (Lisa), Corey (Dana-Jo) and Christa (Robert); grandchildren, Tyler, Riley (Joanna) and Amber (Shannon); sisters, Joyce (Lawrence), Doreen, Eileen, June, Beverly (Edward), Patricia (Ed) and Gladys, along with nieces, nephews and many other family, friends and loved ones too numerous to list but you know who you are.
She has been welcomed in heaven by her parents, Carl and Alice Schultz, infant brother Jim, nephew Timmy, and brothers-in-law, Andy, Max, Don and David.
Evelyn was born on June 17, 1943, at home in Camper, MB to Carl and Alice Schultz. She attended Edison School in Camper and completed her high school education at Tec Voc in Winnipeg. She then attended Success Business College and became a legal secretary beginning her career with Newman McLean Law Offices soon afterwards.
Evelyn and Bill were married on December 29, 1965, and started their family in 1969, moving to Deerhorn, MB in 1973 where they raised their three children, ran the store and was the Postmistress until its closing.
Later in life, they opened their home to many children in need of care. Evelyn had a big heart and filled many bellies with her home cooking and preserves. She will also be remembered for her gentle nature and eloquent story telling ability.
There will be a private service for immediate family.
Your thoughts and prayers are greatly appreciated.
In lieu of flowers, donations may be made in Evelyn's memory to the E. M. Crowe Memorial Hospital Guild, c/o Irene Sigurdson, Box 474, Eriksdale, MB R0C 0W0.
The family would like thank the EMS teams and Arnason Funeral Home.