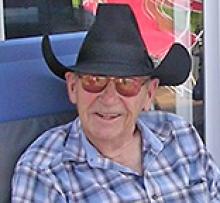 It's with sadness and heavy hearts that we announce the passing of Edward Lawrence (Larry) Sterzer on Saturday, September 19, 2020, at Selkirk, Manitoba, aged 92 years.
Larry met the love of his life Margaret Morrow and they married on September 17, 1949 and raised five successful children. After pulling up stakes in Winnipeg, they moved to Petersfield, Manitoba raising Irish Setter dogs, Paint horses, cows and goats on their hobby farm. The death of his lovely Margaret was an immeasurable and lasting blow to Dad. Since Mom's passing he has been expressing the love he had for her through the many written poems and songs he created in her memory. Larry was proud of all of his five children and being the patriarch of the family, he doled out many nuggets of wisdom and advice over the years.
Raised in East Kildonan, Larry tried his hand at numerous jobs including delivering papers for the Toronto Star; a cook at CN; a helper at Brooks' Tires and at Watkins Pharmaceuticals where he filled Kit Bags with dried eggs which were sent overseas for the soldiers fighting in the Second World War. He found his forever job with the Winnipeg Fire Department (WFD) and dedicated 35 years to the City of Winnipeg and his Brothers and Sisters on the WFD. At time of retirement, Larry held the position of Acting Chief.
Dad often spoke and was proud of the work he was able to accomplish when he was President of the St. Andrews and St. Clements Agricultural Society where he was President and Margaret standing alongside him, acted as Secretary/Treasurer. They shared in organizing many events and horseshows including the annual Selkirk Fair and Rodeo.
Larry was extremely outgoing and friendly and there wasn't a soul he wouldn't stop and chat with; share a story or to make someone laugh. There weren't too many people Dad would meet that wouldn't be left with a smile on their face or even sometimes left scratching their heads. He made many friends at the Woodlands Court in Selkirk where he spent the last five years of his life. Often while visiting, we would find Dad in the lobby or lunch room "holding court" and sharing stories. He would ensure everyone was included and was able to share their stories of family and the past. Nothing gave him greater pleasure than making cards and posters on his computer for someone who was either recovering from a health issue or just celebrating a birthday or anniversary. I know they will miss him.
Larry was predeceased by his lovely wife Margaret, of 67 years; sisters, Anita, Mary Louise and Rose Marie; his parents, Helen and Larry. Left to cherish his memory and mourn his passing are his children: Laura; Rick (Shannon); David (Debra); Norman (Karen) and Sandy; sister Helen Sterzer; brother Father Albert Sterzer in Alberta; cousin Randy in British Columbia; including numerous grandchildren, great-grand-children, nieces and nephews, extended family and friends.
Due to Covid-19, a small private Mass will be held, however a Celebration of Life will be announced at a later date. The funeral liturgy will be recorded and will be available to view on Friday, September 25, 2020, at 3:00 p.m., via the link at the bottom of his obituary at www.gilbartfuneralhome.com
If friends so desire, donations in Larry's memory can be made to the Firefighters Burn Fund, CancerCare Manitoba or Youth For Christ (Selkirk).