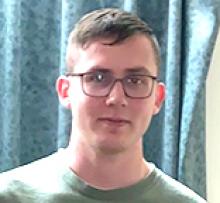 Suddenly and unexpectedly, Justin was taken on September 1, 2020 at his home in Greenwood, Nova Scotia, at the age of 21.
Justin was born on July 29, 1999 to Tim and Andrea Barylski; he is older brother to Tyler, Kylie and Emma; grandson to Randy and Bev Wynne and Barb (Rick) Hunt; great-grandson to Joyce Mott. Justin was loved greatly by his many aunts, uncles and cousins, as well as his close friends, Mikal, Toran, Mark, Austin and many others.
As a young boy, Justin loved John Deere tractors and airplanes. This was until he received his first Lego set and his love of Lego never ended. He was still planning what set to get next with his cousin Kaylea. As a teenager, he started playing the bagpipes. He piped in his graduating class in 2017 and played with the 402 Pipes and Drums band. He loved a cup of hot tea and a bubble bath on any occasion. Over time, he started collecting pocket knives, fancy pens, flashlights and wallets. Justin would post what he carried in his pocket on his Instagram page @everyday_carry_. In his spare time, he enjoyed building his Minecraft world with his friends. He enjoyed fine Scotch. Justin was a kind and thoughtful young man who always puts others needs above his own. He was an old soul at such a young age.
At age 12, Justin joined the 301 Air Cadet Squadron in Stonewall and loved the idea of the military at this young age. He signed on with the Royal Canadian Air Force on October 11, 2018 and left to start his military career on October 20, 2018. He was trained as an Aviation Technician. At his graduation in Borden, Ontario he received the Royal Canadian Air Force Core Values award. We were so proud of him. In November 2019, Justin was posted to 405 Squadron in Greenwood, Nova Scotia. He moved into his own place in January 2020. Even though he was half way across the country, he was never far from our thoughts, always a phone call, text or Facetime away. Justin had plans of eventually moving close to home and helping on the family farm, often talking about the next time he could make it back home, as he missed being away from his family. He had big plans that were cut to short.
We love you our boy and will miss you every single day.
A memorial service was held September 9, 2020 at the Windsor cemetery.
In lieu of flowers, donations can be made to the Soldier On Fund at soldieron.ca
Thank you to George Madhu, his roommate, our family and friends, New Life Church, Pastor Rusty, Ken Loehmer, and the Royal Canadian Air Force. We are so thankful for the loving support, prayers, and comforting words from our surrounding communities.

There are some who,
Bring a light so great to the world,
That even after they have gone,
The light remains.