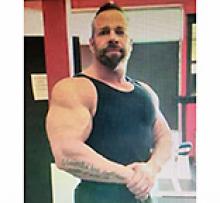 With tremendous sadness, the family announces the sudden and tragic passing of Charles (Chuck) Straceny on September 13, 2020, in British Columbia, Canada.
He was predeceased by his father Karol in 2008 and is survived by his mother (Eva); his brother Kurt (Sayaka) and his niece Kahana, the love of his life: Veronica, and many relatives in Austria and Slovakia.
Chuck grew up in the North End of Winnipeg, born shortly after Karol and Eva arrived in Canada from Bratislava, former Czechoslovakia in 1968. He attended Centennial Elementary, Edmund Partridge Junior High and West Kildonan Collegiate. Chuck excelled in soccer and hockey, playing for the Vince Leah Bruins, where he made and kept dozens of friends, many who remain close to him today. He also made lifelong friends and admirers at every job he had; at every gym he pumped iron in, every class he took or client requesting nutritional advice.
Growing up in Winnipeg, Chuck was always the life of the party: the straw that stirred the drink. Little changed when he headed west in 1996 - where he continued his passion for body-building, nutrition and fitness. In true fashion, it took little time for Chuck's spirit to infect the west coast, where he would make a world of new friends and successfully compete in numerous body-building competitions. This passion would evolve into acting endeavours and then personal training and nutrition-guidance for others - again, leading to more close friendships, and admirers.
Few would deny Chuck packed a century of living into the 50 years he was here. Everyone knew when he was around, making any gathering, party, bar or gym louder and more entertaining; he made any team he was on more successful; and he made his friends better at whatever they were doing or pursuing. He was fiercely loyal, thoughtful and encouraging - not to mention his contagious personality. From his sense of humour and genuine kindness, to his generosity and larger than life persona - if you were around him, you were a happier person.
Chuck was a huge presence in any room he entered, but Chuck never made anyone feel small - quite the opposite. And while a big man in size, he'll be remembered for the size of his heart, warmth and spirit.
The volume of love and respect shared on social-media in the hours following his passing is a testament to his genuine ability to touch people he met.
Celebration of his life is anticipated to take place in both Winnipeg and the Vancouver area in the near future. Please follow his Facebook page for details: https://www.facebook.com/charles.straceny